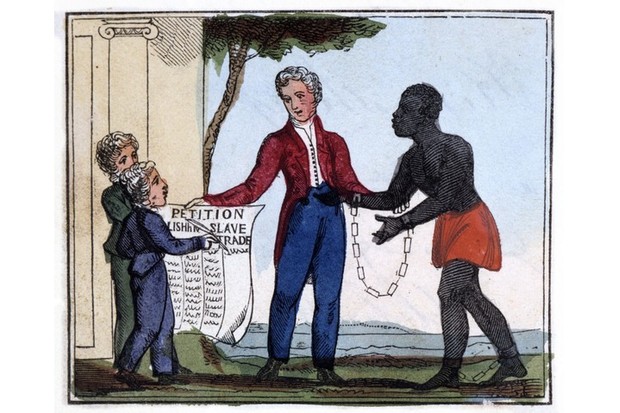 Slavery in the USA was abolished in stages and decades after it was eliminated in Britain.

Though not recognized or protected by Law, many slaves accumulated property. A few hundred slaves even purchased their freedom from their white masters. Slave-owners in the USA usually retained ownership of sick, disabled, or infirm slaves and took care of them. Suicide among slaves in the USA was a rarity. Many slaves (especially in the coastal areas of Georgia and South Carolina) were free to do as they chose once they had completed their daily assignments (the “task system”).

On the eve of the American Revolution, 400,000 slaves amounted to one fifth of the population of the rebellious colonies. Slavery in the USA was abolished in stages and decades after it was eliminated in Britain. Rhode Island banned it as early as 1774. Pennsylvania, New-York, and New Jersey followed suit. In 1787, the Continental Congress prohibited the practice in the Midwest. The slave trade – or, more precisely, the importation of slaves into the USA – was banned altogether in 1808. Even so, between 1808 and 1865, traders smuggled 270,000 slaves into the USA.

But the major engine of growth of the slave population was reproduction. Twenty thousand slaves were born every year during the 1790s – and 70,000 annually in the 1840s. As a result, the ratio between the sexes was equal and the slave population skyrocketed from 1.2 million in 1810 to 4 million in 1860. Some slave-owners even established “breeding farms” and sold the off-spring in the markets of “deficit” states.

Gradually, all the states north of the Ohio River and the Mason-Dixon line became slave-free. Northerners resented the presence of fugitive slaves (about 1000 per year) who crossed the Ohio River in what was known as the Underground Railroad, but they often clashed with federal authorities when the latter tried to extend their jurisdiction to the escapees under the Fugitive Slave Laws.

“Whenever I hear anyone arguing for slavery, I feel a strong impulse to see it tried on him personally.”
― Abraham Lincoln

Most abolitionists – as well as President Abraham Lincoln (who was never one) – wanted to repatriate the blacks (return them to Africa) and, in any case, expel all free blacks from northern and, later, southern territories. The African nation-state of Liberia was established specifically to accommodate former North American slaves.

It was widely acknowledged that slave-owners should be compensated for the loss of their property. Not a single abolitionist supported or even discussed reparations (compensating the slaves for their free labor, denial of freedom, brutal treatment, and hardships). It was accepted wisdom that blacks – both slaves and free – should never be allowed to carry arms.

Slaves in the South (the Confederacy) were finally emancipated in 1863, during the Civil War. But, even then, Lincoln’s Emancipation Proclamation did not apply to some states within the Union. These other slaves remained in slavery until December 1865 , when the Thirteenth Amendment to the US Constitution was adopted.