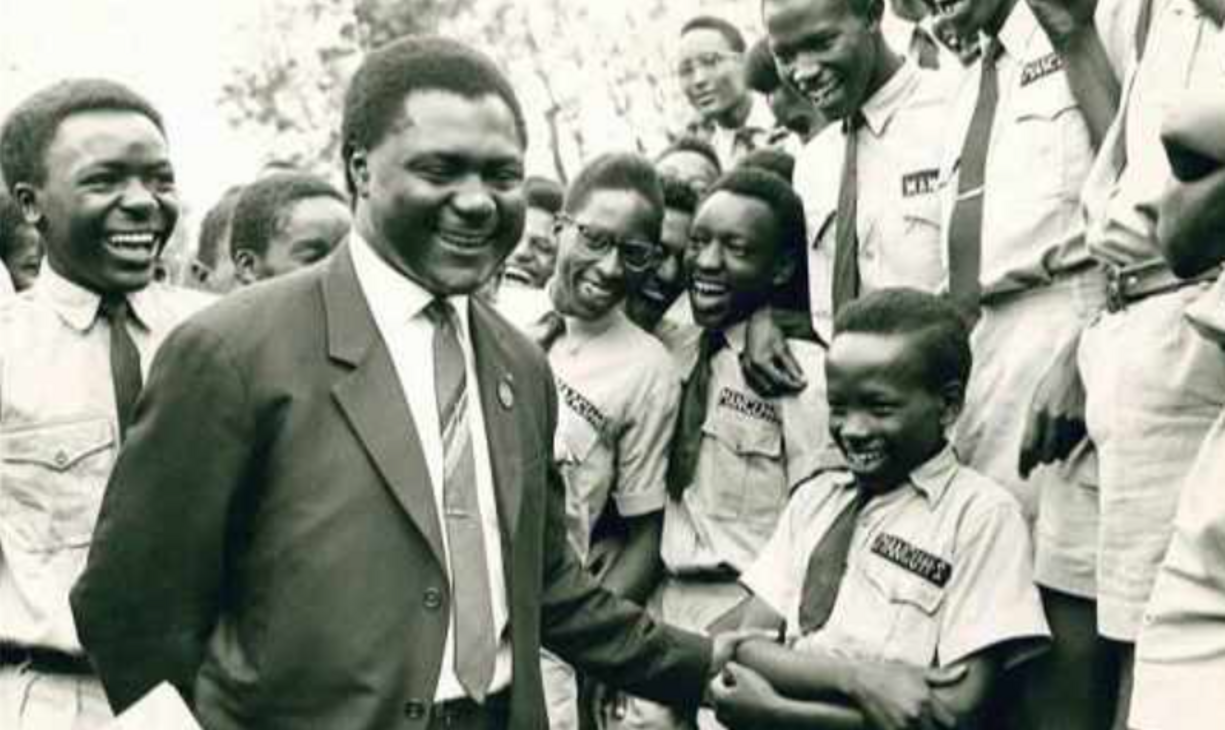 In the beautiful city of Nairobi, on a street formerly known as Victoria street, and now named after Tom Mboya, stands a sculpture of the late Tom Mboya.

Who was Tom? Tom without doubt is one of the legends who sacrificed all he got for the good of Kenya

The Early Life, Education and Family of Tom Mboya

Mboya was born on the 15th of August 1930 in the sisal rich Central Kenya in Kilimambogo. He was son to Leonardus Ndiege and Marcella Awour. Thomas Joseph Mboya Odhiambo was his full name. But who likes long names anyway? So he was just referred to as Tom Mboya.

Mboya started schooling in a catholic mission school which were rampant in the pre-colonial era. He joined St. Mary`s School Yala in the vast Nyanza province. In 1946, he joined the Holy Ghost college and proceeded to Mang`u. He loved academics and all he wanted to do was read, read and read. He excelled at Mang`u and in1948, he joined the Royal Sanitary Institute where he underwent a medical and sanitary training. Mboya didn’t stop. He also enrolled for an economics course at a college in South Africa.

Mboya received a scholarship from The Trade Union of Britain to join Ruskin college a constituent college of the University of Oxford where he trained in Industrial management and graduated in 1956.

The Career and Political Journey of Tom Mboya

At the time of Mboya`s arrival in Kenya. Political pressure was mounting. The desire for independence had sky rocketed and by fire or water, freedom was coming to Kenya. The imperialist had the resources and the power, any efforts to counter attack their government were suppressed. Mau Mau, a group that was agitating for independence had been stifled. Hope had gone through the window and independence would be something of another day,

But when agile men like Tom Mboya, fresh from the University, men with a clear vision for this land stepped foot back to Kenya, things started taking a different lead. Hope once again rose like the morning sun. Mboya started active politics before flying out of the country to further his knowledge. In 1950, he was employed at the Nairobi City council as a sanitation overseer. While there, he started a trade union movement after being elected as African staff association president.

In 1953, after the arrest of the kapenguria six, the six who were arrested reached out to Tom Mboya and asked him to further their course in agitation of independence. Tom used trade unions in the fight for independence. Kenya African Union (KAU) was banned a s a political party by the government and all people found to be politicking were arrested.

In 1956, Mboya vied for the office of the legislative assembly as the representative of Nairobi. All along he continued with his campaign for independence. And he was just not going to stop until Kenya was a free state. As a diplomat, he used his knowledge in diplomacy to acquire support from other states and his international friends. He developed a close relationship with the first President of Ghana Kwameh Nkrumah and American Phillip Randolph.

The small number of leaders in the legislative council worried Tom even more. When Jomo Kenyatta the founding father of Kenya was released in 1961, they came together to form a political party that would steer the country to independence. Kenya African National Union was the party that was formed. He headed a Kenyan delegation to Britain for the second Lancaster conference. While there, Tom chaired the negotiations to agitate for Kenyan interests, he called for an increase in the number of Africans in the Legco, together with the others, they also re-negotiated the constitutional framework and independence matters.

Some Quotes of Tom Mboya

2. We will never sell our freedom for capital, technical or whatever aid. We stand for freedom at any cost.

Achieving that much like Mboya until his last breath at 39 isn’t a walk in the park. It calls for vision, self-drive, hard work and good will. We are all in the position to follow Mboya`s foot marks. Are we?