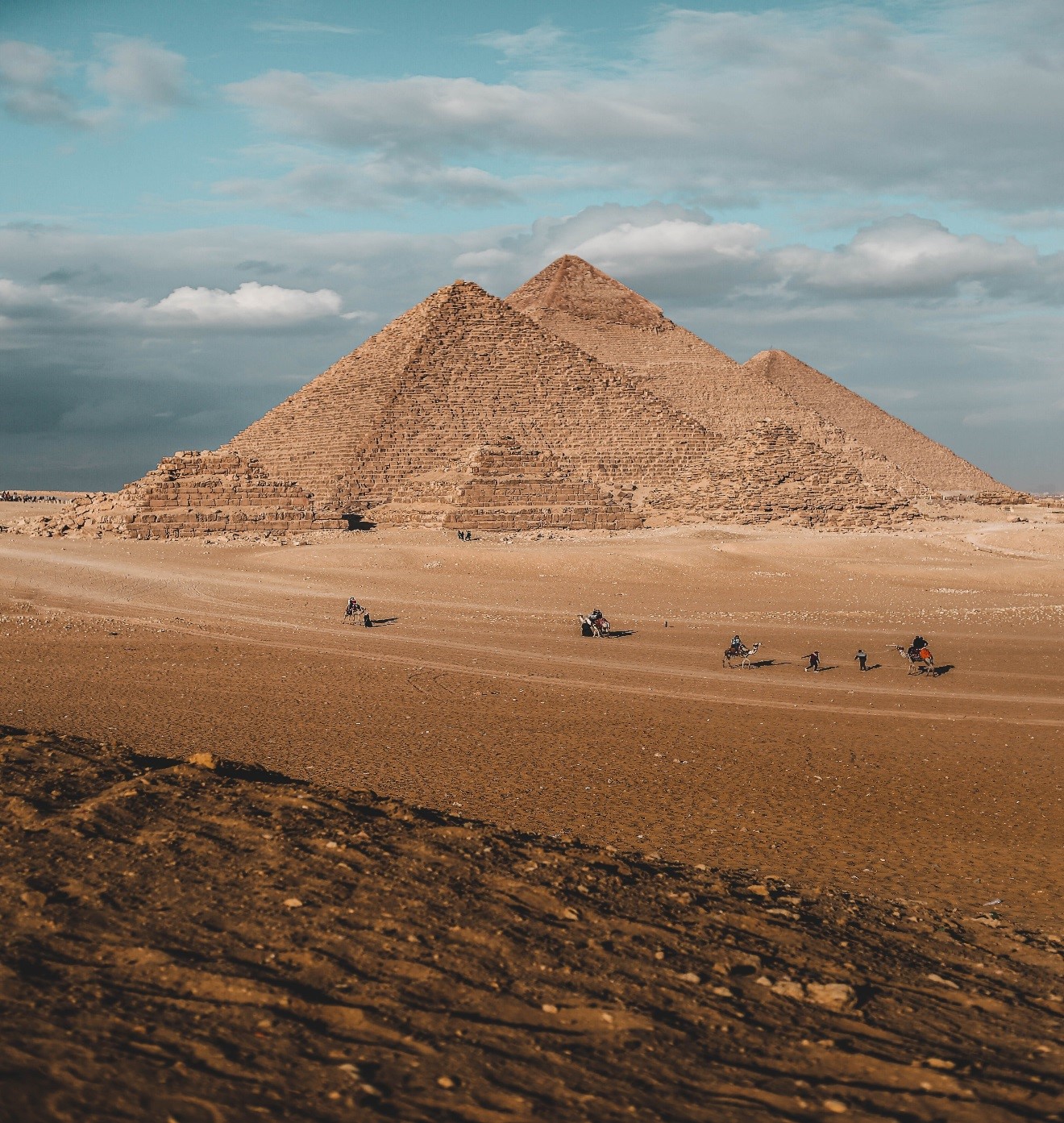 Egyptian pyramids are one of the last-standing seven wonders of the ancient world. They are must-see monuments on any trip to Egypt. They are well structured with designs and patterns that date back to the fine traditional architecture. Although their constructions remain a mystery, the architectures put in fine details making the Egyptian pyramids still stand out in the present day.

This article dives into the old Egyptian History to give you a well-researched article that gives you insights into what you need to know about the Egyptian pyramids.

THE STORY BEHIND EGYPTIAN PYRAMIDS.

When the Egyptian Pyramids were built.

Archeological research cites that the Egyptian pyramids were built around 2490 to 2550 BC (during the Old Kingdom Society) which is approximately 4500 years ago. The pyramids have stood well over time with minimal renovations as they were built to last forever, according to the Egyptians.

Why were the Egyptian Pyramids built?

The stunning structures were built for the Egyptian pharaohs as their final resting place after joining their ancestors. It is believed that the Pharaohs would become gods afterlife making the builders equip the pyramids with everything that the Pharaohs would need to rule in their afterlife. Much isn’t known about what is inside the pyramids as research is still ongoing.

Individuals that build the Egyptian Pyramids.

The enormous monuments were constructed by farmers and local villagers who would dedicate their time to work on the pyramids and sphinx. They always believed that with this kind gesture, their beloved rulers would have a peaceful afterlife and this would bring prosperity to the Egyptian kingdom.

About 20000-30000 workers would build each pyramid, in shifts. The Egyptians were such hardworking individuals in that, a group of 12 energetic men working barefoot in the heated Eastern desert, would manage to quarry about 180-186 huge stones in just 3 weeks.

Tools, Techniques, and Materials Used to Build the Egyptian Pyramids.

The hardworking and talented individuals used very simple tools. Nevertheless, they came up with sophisticated masonry structures that have become one of the leading tourist attractions in the African continent. The tools comprised from Granite Hammers to Copper Pickaxes. They also chipped out rocks and curved designs (for the pyramids) using chisels and dolerite.

Materials used included Limestone rocks, Basalt rocks, and baked mud bricks. Gypsum was used but not widely. Due to the desert-like/ arid nature of Egypt, the materials were not hard to acquire. They mined the Giza quarries for limestone while Gypsum came from Aswan’s upriver.

Architectural finesse applied by the masons (Egyptian workers) ensured that the pyramids would stand out for the longest period in history. A bit of Mathematical and Engineering techniques paid attention to every tiny detail in the pyramids’ outlines.

Relevance of the Egyptian pyramids.

The Egyptian pyramids were built to symbolize the Egyptians strong beliefs of life after death. The ancient Egyptians emphasized that death was just the beginning of another life as the spirit in oneself ‘Ka’ takes over in the person’s afterlife. With that said, Egyptian pyramids did not necessarily act as tombs for the Pharaohs but as a sign of their glorification of life after death. 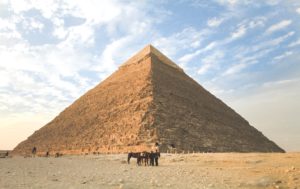 Photo by Jeremy Bishop on Unsplash

The Pyramid of Khufu, popularly known as the Pyramid of Giza is the oldest in Egyptian history. The pyramid was built in 2560 BC in the honor of Pharaoh Khufu who happened to come from the fourth dynasty of the Egyptian Pharaohs. The architect of this elegant pyramid was Hemiuni (Khufu’s seal bearer). He was also the Vizier to Pharaoh Khufu.

This is the largest of the Egyptian pyramid covering a floor space of 230.3 meters square and rising to a height of 138.5 meters (Erosion constantly reduces its height). The whole structure was built with an estimated 2.3 million blocks weighing a total of 6 million tonnes.

A total of 300 visitors are allowed to enter the pyramid each day due to the limited amount of tickets. Solo travelers are also welcomed to visit and get a chance to learn and experience the rich and colorful culture of the Egyptian pyramids. 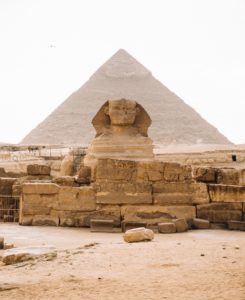 Photo by Alex Azabache on Unsplash

Next to the Pyramid of Khufu stands still the stunning pyramid of Khafre. The pyramid was constructed in 2570 BC. It was built and designed for Pharaoh Khafre as his final resting place. The pyramid stands out as a true definition of Egyptian structural integrity. Fine details are noted from the identification of limestone blocks, steeper sides, and the pointed top giving it that wow factor.

The pyramid of Khafre boasts of the top engineering skills that were applied in its construction. It has two entrances and multiple chambers that are accessible to all tourists. You can visit the burial chamber and get amazed by the outstanding limestone beams.

To add to its sophisticated look, the Great sphinx is located adjacent to it. The place is always packed with tourists from across the world.

The North pyramid as it is commonly referred is located in Dahshur. The name ‘Red Pyramid’ came from the red limestone that was used to construct it. The red pyramid is the third largest of the Egyptian pyramids. The pyramid contrasts to the pyramids of Giza due to the smooth edges and pointed tops.

It was constructed by Pharaoh Snefru around 2575-2551 BC. The construction took about seventeen years. The pyramid consists of three chambers. An amazing factor that the pyramid has, is that the compartment is located vertically to the apex.

Due to the pyramid’s location, the Red Pyramid is not flooded by tourists making your visit to this pyramid calm and enjoyable. There is however no limit to entry in the pyramid giving visitors an absolute up-close to the history of Egyptian pyramids.

The Egyptian pyramids have brings millions of tourists to the country. This has brought about the modernization of the Egyptian economies due to the Foreign exchange and diversification of their infrastructure.

1 thought on “The Story behind Egyptian Pyramids”