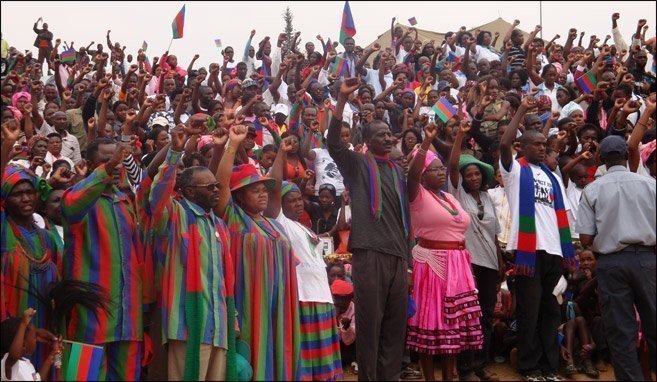 Namibians are going to elect their President on November 27, 2019, 5 years after the Country made history as the first African country to use electronic voting.

The Incumbent President, Hage Geingob who is currently running for his final term in office is clearly the favorite to win the election. Having served as the Prime Minister of Namibia twice from 21 March 1990 to 28 August 2002 and from 4 December 2012 to 21 March 2015, before becoming Namibia’s President in 2015.

His closest rival is a member of his own Party SWAPO, Panduleni Itula. Itula who was the Swapo Party youth leader during the Apartheid regime is the first Presidential aspirant in Namibia’s history to run for an election as an independent candidate.

What this election means for Namibia

Namibia as a Southern African Country survive 25 years of bush war to achieve Independence in 1990 with Sam Nujoma as the first president. Since gaining Independence, Namibian’s democracy has been very stable but many pundits has accused current President, President Hage of lack of political will to fight corruption, describing his economic reform strategy as the worst since Namibia’s independence.

Consistently, President Hage has dismissed such ideologies labeling such personalities as pessimist who were only interested in the failure of his Presidency.

“There are pessimists. There are people in Namibia who want the country to fail. I’ve never seen a thing like that. Praying that things go wrong,” Hage noted

As we have observed, Namibians are mostly concerned about the quality of their daily lives, currently, the poverty and Unemployment rate is rising everyday and the Country is yet to recover from the economic depression that affected the Country in November 2018.

Many Namibians still lack access to electricity, clean water supply and quality education, these are some of the issues that is shaping the narratives for November 27 Presidential elections.

The Result of our early polls.

We conducted a research in Windhoek to ascertain the thought of most Namibians towards the elections, some opposition politicians are very concerned about the possibility of SWAPO manipulating the electronic process, others are very okay with the electronic voting.

In terms of popularity, President Hage was neck-to-neck with Itula. Most people believed that President Hage had ran out of ideas while others were very confident of his ability to give the economy a new ray of hope.

1.  This will be the second election with electronic voting

2. Fourteen political Parties will take part in the election

3. The election will be conducted by Electoral Commission of Namibia.

4. Eleven Presidential Aspirant will take part in the election

5. Incumbent President, Hage Geingob is the clear favorite, but the rising profile of Panduleni Itula is of serious concern to President Hage camp.