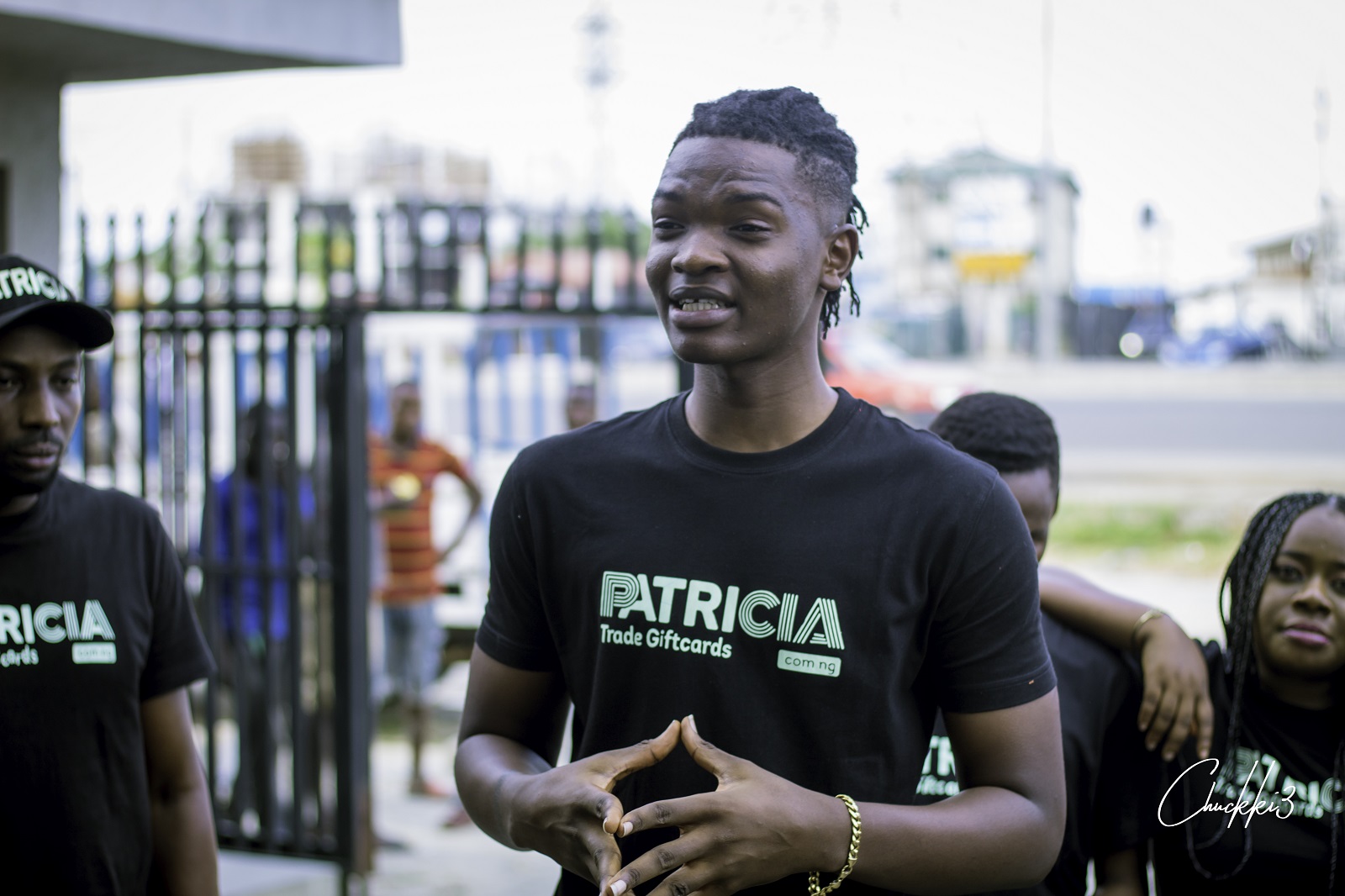 Fejiro Hanu Agbodje is a young Nigerian who is  the Founder and CEO of Patricia technologies: an alternative payment solutions company that facilitates the easy use of cryptocurrencies for everyday transactions.

Fejiro Hanu Agbodje was born on the 16th of November, 1995 in Warri, Delta State, Nigeria. Fejiro boasts of a whooping net worth of $8.9 million USD according to carmart.ng. He grew up in Warri, Lagos and Port Harcourt. Fejiro studied Mathematical Statistics in University of Port Harcourt. A course he hated so much. As a little kid, he had always wanted to be an engineer because of the glamour that comes with the lifestyle. He would watch engineers travel offshore fortnightly and on arrival, would come home with cool stuffs which he found fascinating. But has destiny would have it, every university he applied for kept offering him Mathematics. Later on, he would confess that Mathematics has influenced his entrepreneurial journey and he has no regrets.

Before The Birth of Patricia Technologies

Before the birth of Patricia, it is important to mention that Fejiro Hanu Agbodje had engaged in series of businesses most of which failed. At the age of 8, he saw an opportunity in which he tapped into. He recalled in an interview that it was inter-house sport day which had different schools in attendance.

He noticed that there were no fancy sweets like the ones sold opposite where he lives. He approached his mum for a little loan which she refused to grant. But his zeal would not make him give up easily. He knew where she kept the stash so he went to get some without her knowledge. Went across the street, purchased the fancy sweets and confided in the woman who sold them to please keep those particular notes because they were crispy notes and he felt his mother would know.

After coming from school, he made so much profit that he paid the woman and collected the crispy notes. He later confessed to his mum who was amazed at the profit he had made. Right since that time onwards, she has been supportive of his ideas. Later in the university, he started a bike business where he was scammed. He later ventured into selling popcorn and recharge cards. While some of his friends would make fun of him, he was never discouraged. Fejiro attributes his mental ability to stand above shame as a key factor responsible for his success till date.

While others would give into peer pressure and give up when family members mock them, Fejiro stood his ground and today, he does not regret never listening to them.

The Birth of Patricia Technologies

The birth of Patricia Technologies is one of fate. The idea came from a disappointment Fejiro experienced when his uncle who lived in the UK gifted him bitcoin. He looked for where to convert it to cash but to his amazement, he couldn’t find any, safe for one peer-to-peer platform he stumbled upon that eventually scammed him. This bitter-sweet experience was what brought about the idea of creating Patricia, a company committed to changing the narrative of fintech and e-commerce in Nigeria. He says the company is self funded. He told the story of the journey from where he came to Lagos to stay with his elder brother who he shared his dream with. He had saved up 800,000 Naira from profits made from early days entrepreneurship.

His elder brother’s manager, who was later briefed on this idea simply put out a tweet that a tech company in Lagos was looking to recruit staff. To their amazement, the boys quarters Fejiro rented for office space was full of applicants the next day. All application was perused and only two applicants were eventually shortlisted. The first week of work was not inspiring at all because no trades were made. Fejiro attributes the turning point to an advert made by Mr Jollof, an Instagram influencer in 2017. He confessed that he did not like the ad as he felt the influencer did not put energy into it but he was wrong. Calls started coming in. Even though every call was not converted to a client, it was a win for him that people actually were interested in the company. The yuletide season came and his two staff had to travel to go see family. Fejiro reveals that he was left with all the job. He took no Christmas or new year break. After 2 months, one of the two staff resumed. The other staff who was a female never came back. The staff who came back took a look into the records for the past 2 months and they realized they had made over 3million Naira in profit. A reality Ejiro was not aware of. This further increased the zeal of the staff. Today, the one who came back simply known as Chris is the General manager of Patricia technologies.

Patricia is known to be a leading force in the cryptocurrency ecosystem in Africa. Patricia technologies started with buying and selling bitcoins until people started making enquiries about gift cards. In an interview with Peace Itimi, Fejiro revealed that Patricia in itself is a company under Patricia universe. He revealed that there are other companies he has established such as Glover which is a simple, safe and secure platform that provides alternative solutions to payments through the use of Bitcoin, Perfect Money and Giftcard.

On Glover, businesses could build their own gift cards for their customers, sell gift cards and also purchase gift cards. Patricia is a diversified company that has also launched an initiative called Hank, a solution to the problem of misplacements. He said this idea was inspired by his inability to keep track of things particularly the house or car keys his parents gave him while he was small. He had the habit of misplacing them and till now, he still misplaced his ATM card. Hank is a hardware device that helps you locate missing items. For example, ones phone can be hanked. If missing, it would be found via the hank tracker or the hank app. In addition to Patricia’s technological diversification is the creation of a bitcoin debit card, a first of it’s kind invention. Fejiro believes that this move is going to help with the adoption of bitcoin whereby people won’t just have to buy or sell bitcoin but they can purchase stuffs with bitcoin. It is also worthy to mention the Airtime to cash innovation. This was inspired by the exploitations he experienced while at the university. Back then, he revealed that his mum sends him airtime to sell. 5000 worth of airtime was always sold for 2000 Naira, a price far below the value. It was this that prompted the invention of airtime to cash which is the first of it’s kind.

What the Future Holds for Patricia Technologies

According to Fejiro Hanu Agbodje, CEO of Patricia, he is quoted as saying that “we cannot achieve our vision of Patricia by just focusing on Nigeria.” Patricia has established company in Ghana, South Africa, UK and Estonia.

You will recall that the Nigerian government placed a ban on bitcoin in February, 2021. This had a devastating effect on Patricia as bank accounts were blocked making it impossible to run the business. Fejiro Hanu Agbodje revealed in an interview that he could not even open a bank account in his own country. No wonder why they have moved their head quarters to the Republic of Estonia, North-Europe, a country that supports fintech companies. When asked in an interview about the challenges his company faces, he said just one major challenge and that is regulation. He believes that they can handle other challenges but government regulations is beyond their control and this affects business as they start to lose customer trust.

1. We all are capable of giving something if we put our mind to it.

2. When I look up I see Patricia-Universe, the C suite of Patricia, The Hod’s, Team leads, Business managers, Agents; I see the need for my people to be genuinely smiling back at me.

4. Half of the time we try to speed up the process, what I have realized is sometimes a blessing given too soon is not a blessing at all.

5. Sometimes a fathers goodness is proven by the ability to say not yet.

6. If we get what is ours too soon, we might not know how to handle it.

7. Trusting the Process, learning Patience with the Process to get to the goal, We cannot abort the process We have to endure the process… Why? Because they are lessons hidden within the struggles that we have to experience.

8. The Blessing is already prepared. The real question here is “Are you ready?”

9. There are no limits to what we can achieve except the limits we put on ourselves. We are living and walking Gods, There is nothing you cannot be, do or have,.. Persistence and consistency with sheer ambitions would take you everywhere.”

10. Everything always seems impossible until it is done… I’ll tell you this guys, no one actually achieves anything Great without actually accomplishing the impossible at least once in their lifetime.

11. The amazing thing about crypto is that it is not bounded by geography, It’s packed with so much potential, It’s young, it’s fresh, and it’s exciting,

12. Most importantly do not forget to “DO THE MOST!”

2 thoughts on “How Fejiro Hanu Agbodje, CEO of Patricia is changing the narrative of fintech and e-commerce in Nigeria”