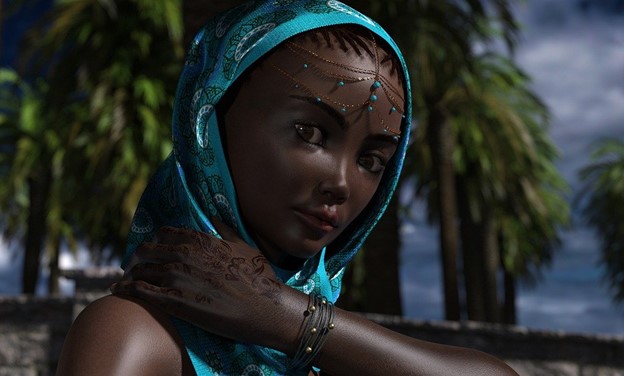 The African tattoo and body markings are more than just skin deep. But when we think about tattoos, we usually envision tattoos on white skin or caramel (African American) skin. It is only within the last decade that we have begun to embrace gorgeous handprints and magnificent body arts made for African black skin.

Like the African tribal hair, tattoos are also an essential aspect of African makeup. Many African tattoo designs have deep symbolic meanings and with enormous significance in our enriched culture. African tribes have used these body markings and arts to decorate their bodies for centuries. They usually involved piercing, shaving, and body paints. In this article, we will discuss the history of African tribal marks and their meanings.

The History of The African Tattoo

Incredibly, traditional African tattoos date thousands of years with a wide assortment of meanings ranging from being used for curing disease to showing off accomplishments, affiliations to certain tribes/groups, social status, and protecting against spirits.
However, there is no thorough documentation on the African tattoo culture and history, but there are a few notable exceptions. Anthropologists first discovered historical African tattoos as plain-ink designs on the mummified corpses of women dated near the peak of ancient Egypt’s civilization in 2000 BCE. These anthropologists postulated that these women used tattoo markings for rejuvenation and fertility. This was because of the patterns of the tattoos and where they found them on the bodies. The women with these markings had them around their abdomen and pelvic regions. For men, the only tattoos discovered dated only as far as 1300BCE. They were thought to symbolize Neith, the ancient goddess of war and weaving.

Besides Egypt, tattoos have equally been found on mummies in other African countries, with many thought to have been created to show devotion to sun worship.
The tattoos they found were very simple in design, usually consisting of straight lines or elliptical patterns on the face, arms, legs, and navel area.

African body markings were once prevalent in North Africa, especially Egypt, Libya, Algeria, and Morocco.
Nevertheless, in recent times, the practice of tattoo or making other engravement is frowned upon among Islamic societies in North Africa and considered unholy and disrespectful. So certain tribes in these regions use henna designs in making temporary tattoos. In reality, the henna dye for pigmentation is encouraged for Muslim women to stain their nails in demonstrations of feminity. These women also use it to distinguish the female hands from those of a man. This practice is also becoming widespread today and has become an arguably prominent fixture in bridal makeup worn by Islamic brides. Yet, henna designs also date as far back as 9000BCE in ancient Egypt and have been used to adorn women’s bodies as part of social and holiday celebrations, especially in the context of fertility and marriage celebrations. However, it’s also essential to remember that henna designs are not actual tattoos. Tattoos are permanent. In contrast, the henna sits on the skin’s surface temporarily. We can also use henna to dye silk, leather, wool, and hair and nails.

In Sub-Saharan Africa, the most common type of tribal body markings is called scarification. In this case, sharp instruments are used to cut deep enough into the skin to make a permanent marking. They would slice sections of skins into patterns and shapes so when the skin healed and scarred, it created a shape or design that remained permanently. The main objective of scarification differed from one place to the next. But, most believe that scarification, especially when adorned on the face, made the wearer less desirable to the spirit of death.
However, the skin scarification practice is a harrowing experience. It can also be dangerous, as the lack of aftercare meant people suffered from infections contracted through the puncture wounds and would often result in death if there is no immediate treatment. Nevertheless, scarification is prominent mainly in the Sahel region, which stretches from Senegal to the Red Sea.
One of the most heavily tattooed tribes in the Sahel region is the Fulani. They are equally the largest tribal group there. 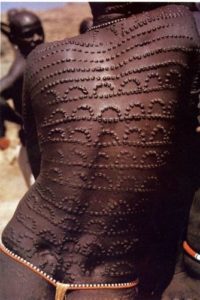 Although details of African body markings are had to come by, particularly about the number of tribes, periods, and the true significance, the use of these tribal marks was said to have increased during the Atlantic Slave Trade. It was said tribe members being shipped off as slaves were marked to identify them should they ever be freed or rescued. People also made these tribal markings to ensure that the identities, ethnicity, religious affiliations, social status, life events, and accomplishments of the people wearing them were not forgotten when they moved to the foreign land.
Before long, the slave owners and traders caught on and began to use the African body markings as a commercial system of slave classification. With these marks, they could get paid highly for slaves bearing marks identifying them as courageous. The African body markings also helped them recapture escaped slaves and ensure slaveholders paid taxes.

Contemporary Use of Tattoos in African Societies

More recently, these traditional African tattooing practices center around the cicatrisation process: scarification plus tattooing. So, the cicatrisation process would involve cutting the skin to create the scar tissue, plus a tattooing process that uses ash or soot as the pigments of colours to create an intensely dark appearance.
Often enough, these scars are re-opened to add pearls and pebbles underneath the skin for a more defined and raised effect. In many tribes, the cicatrisation practice is used as a ritual and rite of passage. Boys would be given those marks as they hit puberty, and a few years later, when they approach manhood, the scars will be re-opened to add the pearls and stones. 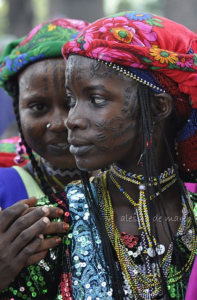 As said earlier, many African societies also use tattoos to determine social status and hierarchies. Persons with extremely basic tattoos (simple lines and shapes) or those without tattoos are considered low-ranking within their social groups or tribes.
In contrast, high-ranking leaders such as Chiefs would have detailed and elaborate African body markings to display their influential status. Naturally, as a person increases in rank, their basic tattoos will be redesigned to make them more complicated and detailed.

It’s important to realize that not all tattoos are tribal, religious, or ceremonial. In the present day, many use tattoos for purely decorative purposes. But there is no doubt that African tattoos can be considered one of the most enriching origins of the tattoo culture. Today, African tattoos are becoming very popular because we no longer make simple marks but artworks portraying African history and culture.
So, the next time you see someone with a tattoo, research its history. There might be a fascinating story behind that gorgeous design. Regardless, Africa is an enormous continent with a completely different culture. So be prepared to realize that one African tattoo design might have utterly different symbolism in one region than it does in the next.