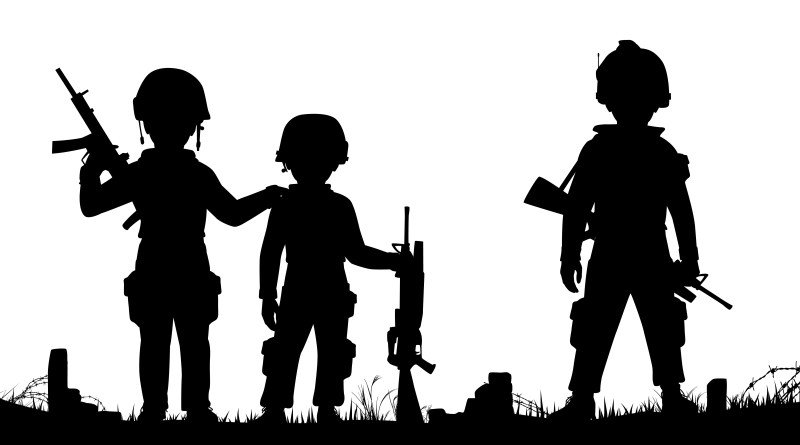 They took us away at night.
We were sleeping at home after we had finished eating our dinner of ugali.
The rebels raided our settlement, shooting sporadically in the air. They killed some people and raided their homes. We were caught unawares, I watched as they shot papa in the chest. The bullet pierced through his chest and he fell down on the floor, lifeless.

They took mama and Miremba my sister away. I don’t know where they took them to.
The rebels did not kill the boys they captured in the settlement, they actually came for us.
I had attempted running when I saw the lifeless body of papa and his blood splattered on the ground. I took to my heels, running into the clump of bush in the backyard. I thought I could hide there until they left.

Unfortunately, the night was a moony night. The rebels were all over the place. As I ran, I saw two rebels chasing me.
“Stop! We will shoot!” They shouted at me.
I kept running, my heart throbbing, my heart beating furiously. I was hoping I would make it to the bush. I could sight the narrow ditch that seperates the house from the bush. As I made to jump over the ditch, I felt something hard and painful hit me on my back. The blow sent me sprawling to the ground.

Three rebels stood over me. They spoke aggressively in a language I could not understand. One of them kicked me on my left ribs. He grabbed my shirt and jacked me up. They studied me and my body features for a long spell. I thought I was dead.

Their faces were hideous and scary. They had large red eyeballs. Their hair was long and dreadlocked. I figured out they were deciding on how to kill me. I began mumbling my last prayers.
Their conversation was interrupted by another rebel who appeared to be a senior commander. He barked at them and they stood at attention.

“What are you doing there? Bring that boy here! Let him join the rest!”
They dragged me away roughly.
I was numb with shock and fear as I joined the group of boys standing behind a big truck. The rebels were everywhere issuing orders.
We were herded into the truck like sheep and driven off.

Many of the boys were frightened and sobbing. I could recognize some of them. I could see Ochen who sells vegetables with his mother at Arunga market, I could see Mukasa my friend who accompanies me on bush rat hunting expeditions. could see Bwanbale, Pastor Israel’s second son. Most of the boys had injuries on their bodies. We all shared a collective sense of doom.

Our village had been raided by the members of the Lords Resistance Army, the rebel group seeking to overthrow the government of Yoweri Museveni in Kampala, and installing a new government in Uganda led by the head of the rebels, Joseph Kony.

Mama used to tell me stories when she was in a happy mood. I remember the story of the Eastern sun that came to the rescue of a boy who had lost his way at night. The boy had stood lost at the crossroads leading to the north, east, west and south. As the boy cried, the sun appeared and shone on the eastern path. The boy followed the eastern sun and got to home to meet a feast prepared for him.

The story always captivated me.
That night we were taken to one of the rebel camps.
We were given guns and informed that we were now soldiers in the rebel army. They told us we would go on a raid the next day in another village to recruit more boys to join us.
We were child soldiers.

We were forced to drink a greenish concoction with a foul smell as part of our initiation into the rebel army.
They then gave us food in two large bowls.
Only a few of us were able to eat anything.
I couldn’t sleep that night, I was thinking of revenge. My mother’s face appeared to me in the dream.

“You are the child of the eastern sun, you are the chosen one to end this suffering. Rise through the ranks and avenge the murder of your father!”
She disappeared.

It’s been three years since then. I have been a very vicious and deadly soldier. I have killed three of the rebels who raided my village that night. I am now a captain of the rebel army.
Everybody calls me, “Child of the eastern sun.”
Tonight, for the very first time, I and the other captains would be meeting our Supreme commander Joseph Kony in his secret hiding place. We are having a strategy meeting. I am meeting the man who ruined my life.
Tonight he is going to die.