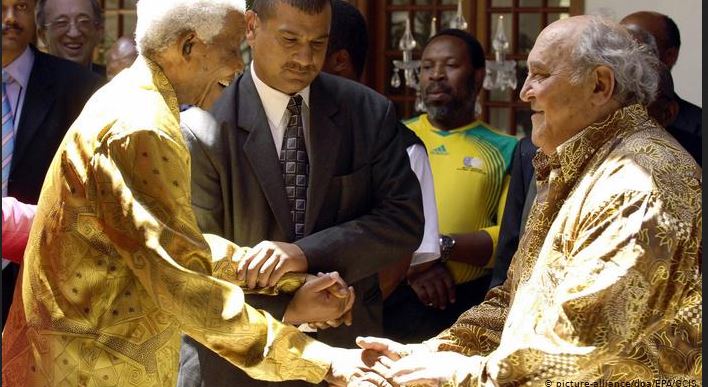 Denis Goldberg, was a close friend of Nelson Mandela and the only white man who was convicted alongside Mandela and others at the Rivonia trial. Goldberg spent 22 years in a Prison because of his involvement in the anti-apartheid struggle.

Born on April 11, 1933, Goldberg died few days ago at the age of 87years after a long battle with lung cancer.

1. We fought apartheid because the resources and the valuable minerals and the lives of our people were stolen by apartheid and now we are stealing the very valuable things that our very constitution is supposed to defend.

2. Political activist parents who risked their lives and their freedom for the liberation of South Africa extracted a high price from our children.

“Getting old is not for weaklings” – Goldberg

3. I was born with a sunny disposition. I know even if it’s raining the sun will shine tomorrow and even if it’s overcast there will be a little glow of light somewhere.

4. We praise Mandela for his sacrifice, but yet we are not prepared to sacrifice ourselves. I am appalled that people do not respect and enhance the freedom of others

“I grew up during World War Two. South Africa had racism by law but we sent soldiers to fight the Nazi racists. When you’re 12 years old, it doesn’t make sense. My real heroes were the people who said they’re not going to live under the absurd system of racism of the Nazis and were prepared to risk their lives. I think that was the biggest influence on my life, that if I was called on, I would have to do something.” – Goldberg

5. It is sad that we still have historically privileged South Africans who believe in their superiority, despite their own amorality

“You can find yourself or not, it’s up to you, but you have the chance.” Goldberg