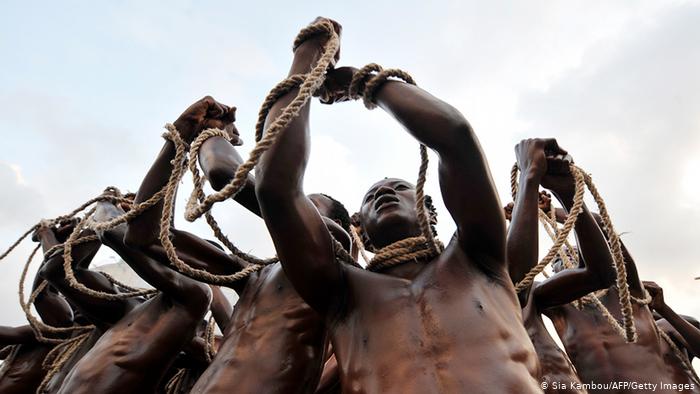 The Slave trade was a booming industry in the United States of America, some hundreds of years ago. Blacks were imported from Africa in chains and forced to work in plantations and houses. Blacks were treated as sub humans. Spanish settlements in the territory of the current-day USA owned slaves as early as 1526. Twenty one African chattel slaves were first brought to British North America (to Jamestown, Virginia) in 1619. They joined white indentured labourers (servants) from all over Europe as well as Indian (Native-American) and Caribbean slaves. All the colonies legalized race-based (black) slave trade and introduced “slave codes” by 1670. In total, 10-13 million Africans were abducted (mainly by other Africans and Arabs) and sold as slaves (mostly in the Americas) between 1620 and 1880.

The slaves were transported across the ocean in especially fitted ships. They were kept lying on narrow ledges, chained, but were brought above deck in good weather. Women and children were not shackled. Even these harsh conditions did not prevent the would-be slaves from frequently attempting to rebel, though, usually, unsuccessfully.

Overcrowding, minimal and monotonous diet (two meals per day and a pint of water), poor hygiene, epidemics, and lack of physical activity decimated, on each and every 1-2 months long trip, a whopping one seventh to one fourth of the “cargo” and one sixth to one half of the crew. Another 10% of the slaves died during the process of “seasoning” – getting used to local conditions in their destinations.

Initially, all types of unfree workers, regardless of color, were treated the same way: bought, sold, and worked, sometimes to death. Gradually, starting in the 18th century, light-skinned slaves (“house negroes”) and whites were treated more leniently. Surprisingly, slave rebellions were rather rare – perhaps because cruel slave-owners were socially ostracized and miscegenation (white-black sexual liaisons) was frowned upon.

Most slave-owners regarded themselves as custodians of their slaves. They properly fed the working adults (though children usually went malnourished), allowed them to grow vegetables in their own garden plots, provided them with clothing (four suits) and housing (one wooden cabin per family). In wealthier and larger plantations, the slaves were cared for by qualified physicians. The master felt it his obligation and right to constantly intervene, interfere, and meddle in the lives of his inferiors.

Slave life was richer than portrayed in literature and cinema. Slaves belonged to churches and were ordained as ministers and preachers. A few learned to read and write. Music was a favorite pastime. Understandably, so was drinking. Slaves were allowed to moonlight or work on their own free time.

Still, slaves constituted more than half the population in some southern states (South Carolina, Mississippi) and two fifths of the total southern populace (compared to an average of 5% in the north and 10% in New-York). Of the first 12 Presidents of the USA, 8 were slave-owners. Some slave-owners were themselves black and former slaves.

The Law, even in the Deep South, recognized slaves as both chattel and human beings. Slaves were held responsible for criminal acts they had committed, for instance, and enjoyed many human rights (e.g., the right not to be killed, tortured, or beaten brutally, to be cared for in old age or sickness, to receive religious instruction, to bring suit and give evidence in some cases). Case law and non-binding custom endowed them with additional privileges: the right to marry, own private property (peculium), have free time, enter contracts, and (if female or child) be consigned to lighter labor.

Still, a minority of slave-owners ignored these legal protections and social censure and indulged their sadistic urges and sexual appetites. In some plantations, nutrition was so lopsided or deficient that slaves resorted to eating clay to supplement their diet. In others, mutilation, branding, chaining, torture, murder, and rape – all criminal acts prohibited by Law – were common.

But while individual slaves were, at least theoretically, protected by law and social custom – not so the negro family. The owner had the right to sell his slaves separately, regardless of their familial ties. Some states, like Louisiana in 1829, passed legislation prohibiting the sale of children under the age of ten. Others (Alabama and Georgia) forbade the separation of inherited slave families. But these were the exceptions to the widespread practice of slave trade.