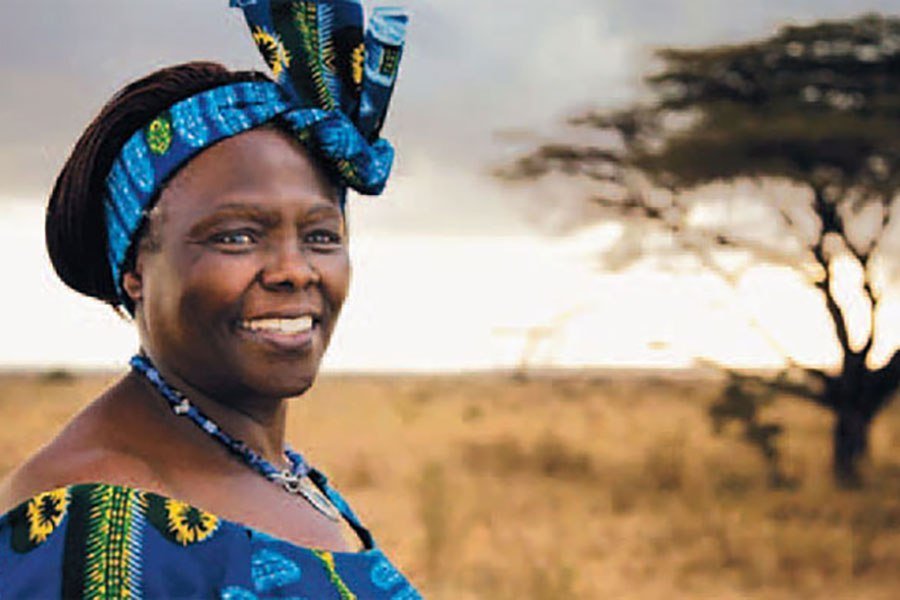 Born in Ihithe village, Nyeri, Kenja, Wangari Maathai was the founder of the Green Belt Movement and a 2004 Nobel Peace Prize Laureate.

She was one woman who fought at all fronts to preserve land, prevent deforestation and regain democracy for her people against the dictatorship rule. In her words,

Upon finishing her studies which she majored in Biology, she began lecturing in University of Giessen in Germany as a research assistant and later returned to University of Nairobi as an Assistant lecturer in micro anatomy, and by 1975, a senior lecturer in anatomy. By her presence in the academic community she began campaigning for equal benefits for the women on the staff of the university and became involved in civic organizations in early 1970s. She was a member of the Red Cross Society, Kenya Association of University Women, Environmental Liaison Centre, a board chair working with United Nations Environment Programme (UNEP), and later she joined the National Council of Women of Kenya (NCWK).

The are opportunities even in the most difficult moment – Wangari Maathai

Through her work at the various volunteers associations, it became evident to Maathai that the root of most of Kenya problems was environmental degradation. Thus she formed her life work by reconnecting with rural women who she had grown up with; as these women complained of their poor yielding fields, malnourished children, lack of firewood and scarce clean water, her answer to them was, “Well why not plant trees?” and this birthed the Green Belt Movement.

The Green belt Movement is an NGO focused on planting trees, environmental conservation and women rights. Founded in 1977, the organization encouraged rural women and families to plant trees in community groups, thereby preventing deforestation while providing new sources of livelihood to rural communities.

A supportive wife Wangari was, for her husband Mwangi Mattai, who run for a seat in the Parliament and won. During his campaign, hr promised to provide jobs for the unemployed; Wangari seeking how to help her husband make this promise true founded Environcare Ltd, where she connected her ideas to environmental restoration to provide jobs for the unemployed by planting trees to conserve the environment, involving ordinary people in the process, and agreeing to pay them a stipend for each seedling planted.

In 1980, Kenya was under the repressive regime of Daniel Arap Moi, a dictator that outlawed group gathering and right to association. He fought the Green Belt Movement and her members, and went to the extreme of deforestation by giving government lands to private individuals as a gift for their political support. This led to Wangari and the group helping to claim Kenya’s land from a century of deforestation, fighting against poverty, ignorance, embedded economic interests and government corruption. Thus bringing down a 24-year dictatorship, though at the risk of their life, arrest, molestation, imprisonment and abuse.

Through her works and strong activism against deforestation, fighting for democracy and peace, she suffered political opposition, divorce and financial challenge of unemployment, due to high corruption in the system. Her husband, claimed she was too strong willed a woman and that he was unable to control her, in addition to other claims and accusations, thus filed for a divorce.

On the hand of political opposition, she was opposed throughvarious antics against her political ambition, her right for free and fair government and against the dictatorship government; facing several arrest, molestation, injury and abuse. But that did not weigh her down, she continued to push against it and in most cases was vindicated by the international community that believed in her credibility.

Despite the opposition and failures, she was strong willed to keep running for election and in 2002, under The National Rainbow Coalition, a Coalition of all the opposition political parties, she ran as a member of Parliament and won the ruling party with an overwhelming 98% of the vote. In 2003 she was appointed Assistant Minister of Environment and Natural Resources by a new government, and she stayed in office till 2005, doing what she loved to do best.

The reward for hard-work, consistency and commitment came like a surprise to her when in 2004 she won the Nobel Peace Prize for her contributions to sustainable development, democracy and peace, being the first African woman to receive such an award. Although she had received several award before then in recognition of her work on environmental conservation and fight for democracy, even after the Nobel Peace Prize, several others were given to her, Celebrating this strong woman that stood the test of time.

Dear Africans, particularly my African girls, ladies and women in general, there is an idea in you that can save your community, nation and continent. Like Wangari Maathai, no matter how strong the wind of opposition and setback comes, drive stronger and push harder. Let your voice be heard, as we fight and work to make the African of our dreams. If Wangari Maathai could, you too can!