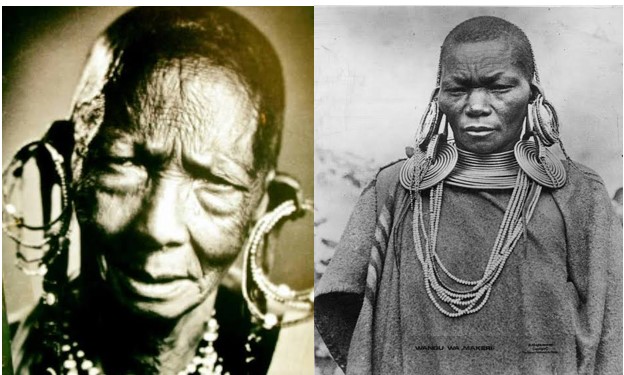 In 1902, during the colonial rule, in a world dominated by men leaders, Weithaga village, a bold and fearless woman, Wangu wa Makeri became a chief. She was the first woman ever to become a chief during that time. A chief who dared to address a Baraza while sitting on the back of a man. How can a woman refuse to sit on a stool and instead sit on the back of a man? Meet Wangu Wa Makeri, a woman from one of the villages in Kenya.

Wangu wa Makeri was born in Murang’a. She was raised by her parents and used to take care of their farm. She had no formal education. She used to work in her family farm. She met Makeri wa Mbogo when working in the farm. She later got married to him, and they had six children.

One day, Karuri wa Gakure, the paramount chief of Fort Hall (currently Murang’a), camped in her village. He was housed in Makeri’s home. He was said to have more than 60 wives. She used to bring food to Karuri often. She brought him sour milk, fresh milk, meat, and food to eat. She entered into a relationship with him even though she was married. As a peace offering or maybe to silence him, Karuri offered the seat of a chief to her husband, Makeri wa Mbogo, but he refused. He then offered the chance to Wangu wa Makeri, who did not hesitate to take the position. And that is how she became the first woman chief a time when the position was exclusively male-only throughout the colonial period.

During that time, the British colonial authorities had started a taxation system. Makeri acted as the go-between for her people and the British authorities. She became a controversial figure to her people. She became an authoritarian tax collector. She would intimidate the tax evaders and imprison them in solitary confinement. On other occasions, she would sit on the tax evaders’ backs as they knelt in her submission and use them as stools. During Baraza meetings, she would refuse to sit on stools and force men to kneel on all fours, and then she would use them as stools. One day a drunkard tried to interrupt her meeting, and she ended up sitting on the drunkard’s back during the whole meeting.

Her downfall as a chief arrived. She was removed from office just because of dancing a dance known as Kibata. Kibata was a male-only dance. During the dance, no women were allowed to dance or even move closer to the men. When she saw Karuri dancing, she decided to join the dance floor, where she danced naked.

This incident became a matter of discussion. She was then forced to resign in 1909 following the scandal. She later died in 1915. Later, one of her sons became chief of the Weithaga location. Today, the place where she ruled has became a children’s home for 50 orphans.

Although Wangu wa Makeri was oppressive to men, she was a role model to women. She proves that what a man can do, a woman can also do it. Most people see her as a disgrace to women since she achieved power by having an affair outside her marriage. This iron lady will forever be remembered for her fierce character of oppressing men by sitting on their backs like stools.