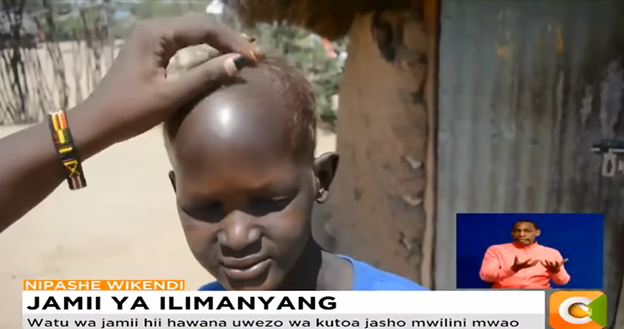 Science has always taught us that it’s normal to sweat. In fact, it’s an essential body function necessary for our survival. On the other hand, the inability to sweat is actually fatal and can lead to overheating, and sometimes, heat strokes. This is because sweating is our body’s natural way of getting rid of excess body heat. Failure to do so leads to trapped heat and the inability to maintain an average body temperature.
But imagine being unable to sweat at all.

This is the reality for a small Kenyan community called the Ilimanyang. Members of the Ilimanyang community carry a rare genetic condition where their bodies lack pores; hence, they cannot excrete sweat. In addition to this, their skin is dry, they have no scalp hair or a few brown hairs, and only two front teeth.

The Ilimanyang community was formed two centuries ago when a Turkana man called Ilimanyang married a woman from the neighbouring minority tribe of El Molo. They then resided along the shores of Lake Turkana. Presently, the community consists of a mere 39 people, with men being the majority.

This rare condition forces them to carry along cans of water whenever they step out. The water aids in cooling the body when temperatures rise. And considering that Turkana experiences a hot and arid climate all year long, with daily temperatures averaging an astounding 35° C, they’re compelled to walk around with lots of water.
The situation is so dire that parents must keep a keen eye on their children to ensure they have water nearby at all times. School-going children living with this condition need to pour water over their heads occasionally, even during class.

The condition is passed down from fathers to their sons. Because of this, experts advise against intermarrying within the community in an effort to stop passing on the genes. Members of the community who decided to move away and intermarry do not carry this disorder, though. Therefore, the experts might be right after all.

Community members strongly believe that a generational curse is the root cause of all this. As claimed by their great grandparents, their ancestors raided a rival Turkana community a long time ago and killed and stole livestock. As a retaliation, the foe tribe decided to cast a spell upon them, which resulted in this condition.

But according to the Genetic and Rare Diseases Information Center, this Kenyan community exhibits symptoms of Hypohidrotic Ectodermal Dysplasia (HED). HED is an extremely rare skin disease caused by a mutation in novel transmembrane protein.

Common signs and symptoms include:
● Sparse scalp hair
● A large forehead.
● A low nasal bridge.
● The inability to sweat.
● A fewer number of teeth.
Until now, there is no specific HED treatment. We can only manage it by treating its symptoms. For patients who cannot sweat, taking frequent cooling baths helps regulate the body temperature since the evaporating water functions as sweat.

Wearing cool clothing and drinking tons of cold liquids also maintain a normal body temperature. It is advisable to live in places with sufficient air conditioning, whether at work or school as well. As for patients who can’t produce enough tears, artificial tears are required to prevent drying of the cornea. Dental implants and wearing wigs can further aid in improving physical appearance.

For now, this Kenyan community is pushing for the government’s recognition of their rare condition. They hope this will capture the attention of senior health experts, who will, in turn, facilitate further assistance and monitoring.