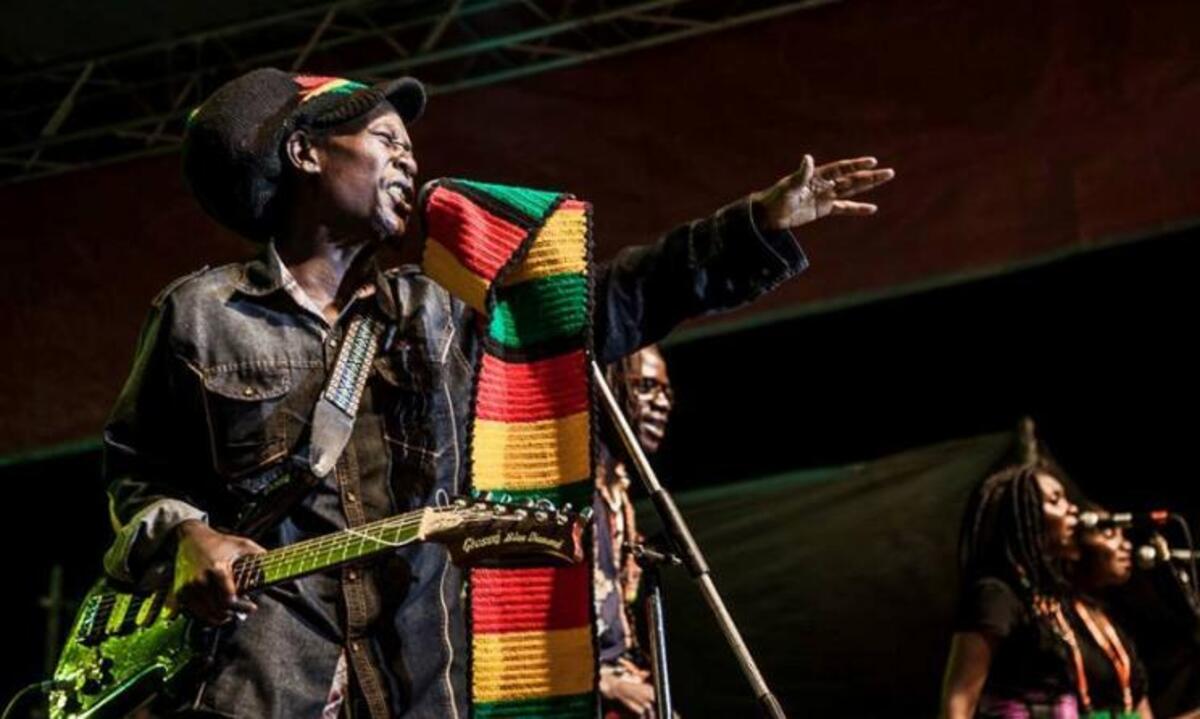 When you hear the word “reggae” what comes to your mind? My guess is Bob Marley, revolution, freedom, Lucky Dube, or even something else. But how has this revolution-themed musical genre come into Africa and grow to what it is today? What can we say about the evolution of reggae music in Africa?

Reggae music has become a part of the African culture that it becomes difficult to tell if it was really of Jamaican origin or African origin. Well, the preference is not far-fetched from its inspiring, mind-opening, and revolutionary lyrics that teach, not only virtues but also essence.

Despite this, reggae music, just like other musical genres, has undergone tremendous growth since it arrived in Africa. But how has this growth process been and how has it affected the musical genre?

The history and origin of reggae music is a popular one, so I won’t write much on it. Reggae is a distinct style of rock music that originated from Jamaica in the late 1960s. This musical genre draws its source from the Jamaican traditional Metro, Rocksteady, and Ska, and was inspired by American jazz and rhythm and blues.

Although this music style is popular among the Rastas – an Afrocentric group focused on the African diaspora, the name reggae came from the 1968 song by Toots and the Maytals, titled “Do the Reggay”. This song was the first popular song to use the word “reggae’ and effectively christening the musical genre and bringing it to the global audience.

Reggae was initially used as a gossip song among the Rastas to tell the story of politics and the suffering of its people, specifically, the African diaspora which they believe are suffering in “Babylon”. But how did this musical genre enter Africa?

History of Reggae Music in Africa

The popularity of reggae in Africa began in the 1970s and 1980s, all thanks to popular Jamaican singers such as Bob Marley and Jimmy Cliff, who toured the world. Their music was well-received all around the world, but in Africa, it was spectacular and was well-received by the people, who felt they needed it.

Since then, reggae music has become a household song and many artists started venturing into the genre. But the first-ever hit reggae song by an African was Sunny Okosun’s Fire in Soweto which was released in 1978. Many other bands followed suit, and in no time, reggae became one of Africa’s most popular musical genres in the late 1970s.

Despite the growing popularity, reggae music was never to be performed or listened to in pre-independent Zimbabwe due to its strong revolutionary elements. But after the world-famous Jamaican reggae artist, Bob Marley performed at their independence celebration in 1980, the musical genre became popular across the country. And that, to many, was the formal beginning of reggae music in Africa.

The same year, Jimmy Cliff performed at Orlando Stadium in Soweto, South Africa, and in 1983, Peter Tosh performed in Swaziland. These separate performances helped in spreading reggae across Africa and inspire musicians, such as Lucky Dube, to go into reggae music.

Evolution of Reggae in Africa

Since Bob Marley’s performance in Zimbabwe in the 70s, reggae has grown so much in Africa. It has produced several notable performers that have been recognized globally and brought more attention to the industry. Meanwhile, the musical genre has also grown and evolved through a variety of styles and moods over the years.

In Nigeria, the growth of reggae could be credited to well-known reggae artists like Majek Fashek and Andy Showman. Meanwhile, in South Africa, Lucky Dube held a great influence on its growth. But the efforts made at the Marcus Garvey Rasta camp in Philippi should not be forgotten.

The emergence of Dub Colossus and the invisible system in 2008 brought tremendous growth to reggae in Ethiopia. But the major modification of reggae was its infusion with Malian music by the Mali singer, Askia Madibo. This was followed by Tiken Jah Fakoly who fused reggae with traditional Ivorian music.

Indeed, reggae was quite popular in Africa and some countries like Cote D’Ivoire, South Africa even had reggae or Rastafarian towns. But it is quite unfortunate that the preference for reggae music in modern-day Africa is diminishing with other genres evolving and dominating the musical industry. Despite this, a whole lot of people still pick interest in the genre, and it remains one of the most popular musical genres in Africa till today.

The history of reggae in Africa is not complete without mentioning some notable reggae music stars in the continent. There are quite a lot of them though, but I’ll only talk briefly about these five:

Lucky Dube, born Lucky Philip Dube, was a South African reggae musician and songwriter. The renowned reggae singer and Rasta was one of the pioneer reggae musicians in Africa.

He started his first band named “The Skyway Band” with some of his friends from choir when he was still young. At age 18, he joined his cousin’s band which was into Zulu pop music called mbaqanga.

After the release of his fifth album, Dube discovered that people’s response to reggae music he performed at some of his live concerts was impressive. Drawing his motivation from Peter Tosh and Jimmy Cliff, he decided to go fully into reggae music.

Well, his first reggae mini-album titled “Rastas Never Die” released in 1984 did sell poorly. But he had realized the effect the socio-political messages associated with the musical genre will have on his country, he decided to try harder.

Meanwhile, some of his albums were banned by the apartheid regime for their strong lyrics, he was never discouraged and he continued to perform live shows. The highest sold South African reggae musician recorded 22 albums in his 25 career years, including Together as one, Prisoner, Respect, and House of Exile, among others. He died in a carjacking in Johannesburg, South Africa in 2007.

Doumbia Moussa Fakoly, renowned by his stage name Tiken Jah Fakoly is an Ivorian reggae icon. He began his career in reggae at an early age and it took no time before he became popular across the region.

His motivation was to transform the social and political domain of his country and soon, he began to write about the political sphere of Cote D’Ivoire. Fakoly’s core was to wake people’s conscience with his music and this led to several death threats because of his strong lyrics.

He challenged injustices towards the people of his country and Africa at large. And called for Pan-Africanism and economic, political, and cultural resurgence in Africa. After several death threats coupled with political instability and xenophobia in his country, he moved to Bamako, Mali where lived since 2003.

Tiken Jah Fakoly made his first international appearance in 1998 in Paris. And in December 2007, he was declared “persona non grata” in Senegal after criticizing President Abdoulaye Wade. He has recorded several singles as well as collaborations with renowned music artists, and he also appeared in several movies.

Majekodunmi Fasheke, commonly called by his stage name, Majek Fashek, was a Nigerian singer, songwriter, and guitarist. The Benin city-born Nigerian reggae star formerly go by the stage name Rajesh Kanal when he was with Jastix alongside Amos McRoy Gregg and Black Rice.

His 1988 album, Prisoner of Conscience, was one of his biggest hits, winning six PMAN Music Awards and his track “Send Down The Rain” becoming a hit across the country. His other albums include his 1991’s So Long Too Long, Rainmaker, and I&I Experience, among others.

Majek Fashek‘s style of music was influenced by popular musicians such as the renowned Jamaican reggae king, Bob Marley – whom he was said to have vocal resemblance with – Jimi Hendrix, and Fela Kuti.

Rocky Dawuni is a Ghanaian reggae singer, songwriter, and record producer with his debut track  “Afro Roots”, a mixture of Reggae, Afrobeat, Highlife, and Soul music.

The first Ghanaian singer to be nominated for a Grammy award was pulled to reggae by the performance of a military band, after performing one of Bob Marley’s songs. He then started the annual “Independence Splash” festival which is usually held on Ghana’s independence day.

Dawuni has recorded seven albums, including Branches of The Same Tree, which was nominated for Grammy’s Best Reggae Album in 2015. His other songs include Beats of Zion and Modern Man.

Alpha Blondy, born Seydou Koné is an Ivorian reggae singer and renowned recording artist. His style of music is politically and socially inclined and they are sung in his native tongue, Dyula, French, and English.

Blondy formed his first band in high school which got him expelled as it affected his performance in school. He was then sent to Monrovia, Liberia to study English before he moved to the United States thirteen months later to improve his English.

The “Bob Marley of Africa”, as was called by his fans, released his first album titled Jah Glory in 1982, which later become the symbol of resistance because of the lone track, “Brigadier Sabari”. His other albums include the 1984’s Cocody Rock and The Wailers which was performed in Jamaica with Bob Marley’s backup crew.