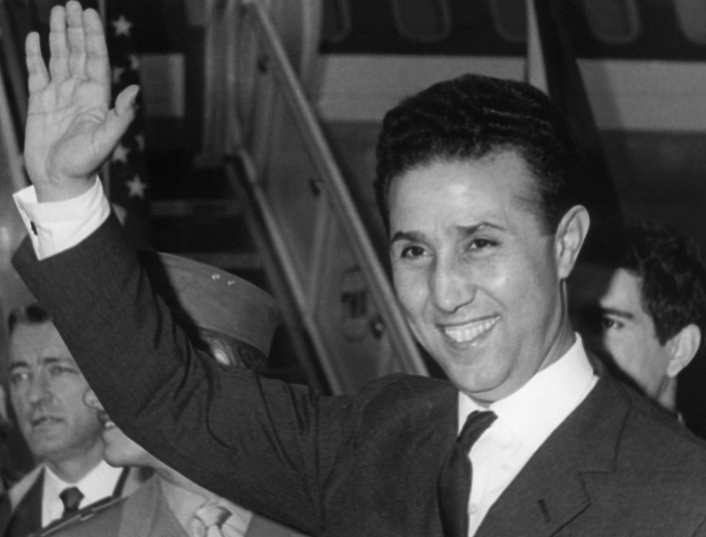 Ahmed Ben Bella was an Algerian politician who served as the first President of Algeria, from 1963 to 1965.

Born on December 25, 1918, Ahmed Ben Bella was drafted into the French army in 1937 where he rose to the rank of a Sergeant before returning back to work in his father’s farm in Algeria.

He Started his political joined in 1947 when he was elected as a municipal councilor for Marnia, one of the most populated in Tlemcen Province, northwestern Algeria. And was elected as the first President of Algeria at the age of 44 on September 15, 1963.

1. We must ask ourselves the question: what we shall do now to prevent a repetition of these insults in Angola, Mozambique, South Africa, and elsewhere in Africa? At these crisis points, African unity must take the form of effective solidarity with those who are still fighting for their liberty.

2. Let us all agree to die a little, or even completely so that the peoples still under colonial domination may be freed and African unity may not be a vain word.

3. Today, we are discussing Africa’s economic problems. I very much fear that everything we are proposing to do in this domain may be reduced to straightforward agreements enabling us to feed our .peoples better. We have no right to think of -filling our bellies when our brothers are still dying in Angola, Mozambique, and South Africa.

4. I am the son of poor peasants who came at a very young age to live in Algeria. I only recently saw the place where they were born, near the city of Marrakech.

“There has been talk of a development Bank. Why have we not talked of setting up a blood bank? A blood bank to help those who are fighting in Angola and all over Africa”

5. With my government, we engaged in bringing our help to fights for national freedom. At that precise moment, several countries were still colonized or had barely overcome colonization. This was the case in practically all of Africa. We supported them

6. In the past, we spoke of poverty, misery only in the south. Now there is a lot of misery, a lot of bad that creates victims in the north as well. This has become manifest: the global system was not made to serve the good of all, but to serve multinational companies.

7. Although there are problems, in particular with regard to the security of countries such as the Congo and Guinea, which border on the crisis areas, it is our duty to examine them and to ensure that our solidarity with these countries is effective.

8. When someone came to ask us for help, it was sacred. We did not even think twice. We helped them, even if we had only meagre means; we offered them arms, a little bit of money, and in many occasions, men.

10. Algeria was therefore only the beginning of something that was in development: this is why I say that it’s the global capitalist system that finally reacted against us.