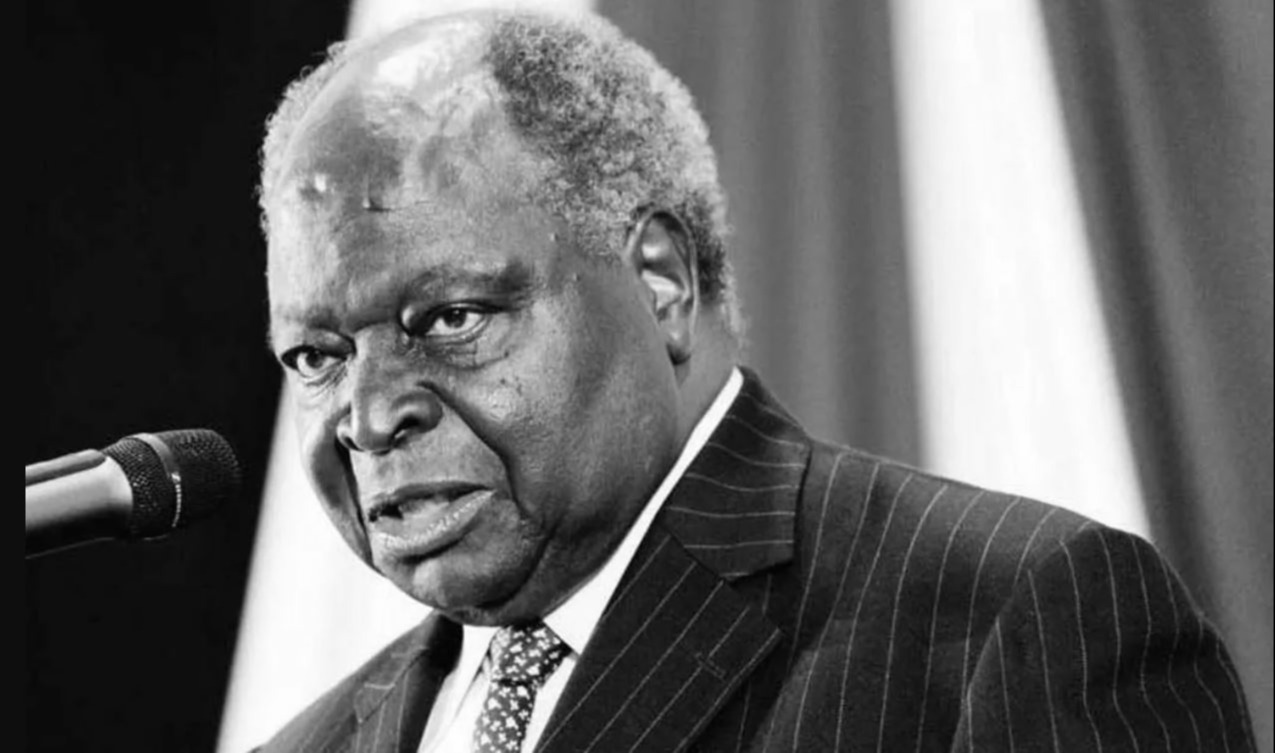 Mwai Kibaki was a simple and humble man who cherished truth and fairness. He was an Iconic Kenyan leader who believed in serving others and demonstrated this in his ten-year presidency. Millions of Kenyans found hope in his leadership and hope that successive heads of state would emulate his exemplary leadership. Mwai Kibaki’s life story is intertwined with Kenya’s history. He is not only remembered as a Commander-in-Chief of outstanding accomplishments but also as a deeply devoted family man. Mwai Kibaki’s dedication in his numerous jobs as a teacher, lawmaker, Cabinet minister, Vice-President, and President taught Kenyans that public service is noble and necessary and that one can serve their country with passion utmost integrity. His distinct sense of dignity and civility will continue inspiring many worldwide for years to come.

Emilio Mwai Kibaki was born on November 15, 1931, to Kibaki Githinji and Teresia Wanjiku Githinji in Central Kenya Thunguri village, in the present-day Othaya Sub-County in Nyeri County. He was the last born among six children. He routinely engaged in tending calves and goats at home when he was young. Catholic missionaries erected a sanctuary near his home at some point, which caught his attention. As fate would have it, young Kibaki enrolled at the mission school, where he attended his preparatory school, dubbed ‘Sub A’ and ‘Sub B’ there. In the beginning, his father was skeptical about his peculiar venture because formal education was still new in the country. However, he could not stop his son’s enthusiasm to become part of a novel adventure. That was the beginning of Kibaki’s illustrious academic enterprise. After completing his preparatory schooling, Mwai Kibaki joined Gatuyaini Primary School, where he spent two years. He later joined the Holy Ghost Catholic Missionaries’ Karima Mission School, which is the present-day Karima Primary School, where he studied for another three years before joining Mathari School (later named Nyeri High School), then later joined the famous Mang’u High School.

Mang’u High School significantly transformed Kibaki’s life. Started by Catholic priests, the school received some of the best brains in the country. The students were fully committed to the pursuit of academic excellence. Kibaki excelled at Mang’u and joined Makerere University College in Uganda to pursue a Bachelor of Arts in Economics, History, and Political Science. He graduated among the top in the faculty of arts in 1955 with a First-Class Honours degree and emerged as one of the best students in the Faculty of Arts. He immediately secured a job as an assistant sales manager at Shell Uganda. He later resigned from his job after securing a scholarship at the prestigious London School of Economics and Political Science (LSE) to pursue a Bachelor of Science degree in Public Finance. He then graduated from LSE, becoming the first African to graduate with a First-Class Honours degree. After obtaining his bachelor’s degree, he returned to Makerere University, where he worked as an Assistant Lecturer in the Department of Economics.

The university would, later in 2012, bestow upon him an honorary Doctor of Laws degree for his distinguished contribution to development at the national, regional, and international levels. Kibaki appreciated the honorary award by saying, “Makerere is where my academic and intellectual foundation was laid. Many of my leadership skills were developed and nurtured here.”

Kibaki met his lovely wife Lucy Muthoni in Kenya and wedded her in 1961. They were blessed with three sons, namely Jimmy Kibaki, David Kagai, Anthony Githinji, and one daughter, Judy Wanjiku. They later also had several grandchildren.

Beginning of a successful political career

Mwai Kibaki began his political career at Makerere University when he was elected chairman of the Kenya Students’ Association. He also served as the Makerere Students’ Guild’s vice-chairman when Africans’ interest in ending colonial domination in Africa was at its peak. He worked as a lecturer between 1958 and 1961, after which he resigned to become the first Executive Officer of Kenya’s independence party, The Kenya African National Union (KANU). His efforts strengthen KANU for victory in the 1961 elections. He was elected as a Member of Parliament in 1963 and was also appointed as the Parliamentary Secretary to the National Treasury.

Life as a Cabinet member

On May 3, 1966, the Iconic Kenyan Leader, Mwai Kibaki was appointed Minister for Commerce and Industry. Three years later, he was appointed to serve Kenya as the Minister for Finance. During his tenure, Kenya achieved 7% economic growth, boosting the young economy to a safe place. His success in the financial field was recognized by a former World Bank President Robert McNamara, who described him as one of the “greatest economic brains to have emerged from Africa”. His former lecturer at Makerere, Prof Kenneth Ingham, believed he would have ended up as President of the World Bank if he had stayed longer in the academic field.

After the death of the country’s founding father, President Jomo Kenyatta, in 1978, Kibaki became the county’s vice president under president Daniel Arap Moi. As the Vice-President, his economic leadership and an economic outlook transformed Kenya’s economy. Kenya benefited from standard monetary policies during his reign that led to consistent economic growth. In 1988, he unexpectedly moved from his Vice President and Finance minister position to the Ministry of Health.  The 1980s were uncertain political times as the ruling party, KANU, worked towards silencing political voices. Regardless, Kibaki thrived politically.

In December 1991, the Iconic Kenyan Leader, Kibaki resigned from the government and began a new political journey by forming the Democratic Party (DP). In 1992, he lost presidential elections and found himself in unfamiliar territory – the opposition. For a man who had been in government all his political life and Vice-President for a decade, he saw a new opportunity to serve Kenyans better, the presidency. In 2002, he got elected as the best presidential candidate by the National Rainbow Coalition (NARC). Despite campaigning in a wheelchair while healing from a fatal accident, he gathered more than 65 percent of the vote during the 2002 general elections and was sworn in as Kenya’s president. In 2007, he was re-elected as the president and served until April 9, 2013, when he retired from politics.

Kenya’s former president, Mwai Kibaki, died on April 21, 2022, at the age of 90, at the Nairobi Hospital. His death announcement shocked the nation. He was given a state funeral with full civilian and military honours. He was finally laid to rest at his Othaya home in Nyeri County on April 30 2022.

Without a doubt, the Iconic Kenyan leader, Kibaki won countless Kenyan hearts throughout his 50 years political career. He also has many admirers across the globe. He was referred to as the gentleman of Kenyan politics. He will be remembered as an intelligent leader with a unique sense of humour during his speeches, where he would comically complete his sentences with s Swahili phrase Hakuna haja to mean “no need.”

After Kenya dumped the single-party system in the early 1990s, Kibaki became a leading light in shaping political multi-party and opposition culture, which saw tremendous changes in the country’s democracy.

Kibaki’s government introduced critical reforms in the education sector, including the globally acclaimed Free Primary Education Programme, which saw massive enrolment of students in primary schools. In one of his speeches, the iconic leader declared his firm stand on education by saying “Education is now the most important factor of production. No one, no country can be competitive without massive investment in education. We must therefore ensure all our children have access to quality education”

His administration also instituted comprehensive infrastructure and better access to healthcare, democracy, economic and social empowerment, the rule of law, and respect for human rights.

Among his significant milestones, Mwai Kibaki is credited for delivering a new Constitution in 2010. For two decades, Kenyans had expressed their wish to change the Constitution that the country had used since independence in 1963. The new Constitution brought in changes in land reforms, bill of rights, devolution, and state organs structure which has seen tremendous progress in the country’s development. He confirmed that the new constitution was perhaps his most significant presidential achievement by saying, “The Constitution is the ultimate custodian of social will and its making should be accorded all due diligence.”

His contribution to economic empowerment went beyond Kenya. At the regional level, he supported the objectives of the East African Community, including the common market and trade liberalization for the benefit of the citizens of the partner states.

Kibaki’s servant-leadership is still felt in the country. Kenya is today a more desirable economic centre in Africa, thanks to the solid foundation built by a selfless icon who no doubt loved and built his country.