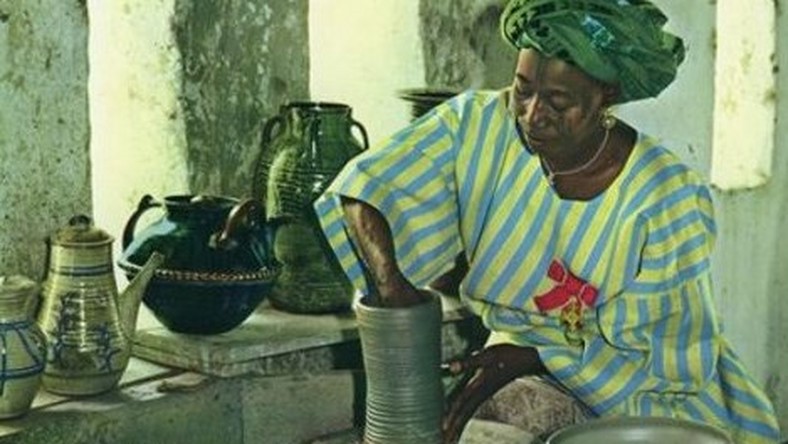 Born in 1925 to Gbagyi parents in the village of Kwali,  Gwari district of  Abuja, Ladi Dosei Kwali  was the first and the only Nigerian woman to appear on a currency note.

She was raised in a family where women earned a living by making pots. And she learned pottery-making as an apprentice to her aunt, who taught her the Gwarin Yamma coil and pinch pottery skills. The Randa (a huge water storage pot), the Kasko (a family storage pot), and the Tulu were three significant object shapes produced by Gwari pottery-making methods. Kwali quickly gained a mature sense of form and a thorough understanding of clay properties, which are essential qualities for a potter.

Ladi Dosei Kwali rose to worldwide popularity in the 1950s with the support of Michael Cardew (Baban Shaku), a renowned English studio potter who co-founded the Abuja Pottery Training Centre with her in 1952 and spent the next fifteen years teaching and learning from Nigerian potters. Kwali had worked as a professional potter; trading and owning a business in Minna, Niger State, before the Center’s opening.

Kwali took her time with her pottery-making, which made them stood out for their elegance and exquisite appeal. This endeared many eminent personalities to admire her work including Alhaji Suleiman Barau, the Emir of Abuja at the time, who  purchased many of her works for his collection.

Kwali was trained in innovative technologies at the pottery centre when she joined in 1954 as its first woman potter. She became well-known for her inventive and experimental works, which combined the Gwari style with modern processes to create glazed dishes, bowls, and beakers with stylized animal graffito.

She also consistently made pots by hand, utilizing her time-honored methods of construction and decoration. The majority of the pieces were glazed and burned in a high-temperature kiln, resulting in an intriguing blend of traditional African and Western studio pottery forms. Her presence at the Center encouraged additional women to participate, and by 1965, another pottery centre, Dakin Gwari, was opened in Abuja, and the centre was run by four women.

Kwali and her work became well-known in Europe and America due to her relationship with Cardew, and she became a popular part of the Centre’s touring lecture team. Her work was exhibited at the Berkeley Galleries in London in the late 1950s and early 1960s. Until her death, Kwali was still involved with the Abuja Pottery Training Centre. Throughout her career, she offered talks and demonstrations on her craft both at home and abroad.

Kwali’s work was displayed in London in 1958, 1959, and 1962, and her efforts helped keep the Abuja Pottery Centre functional. In 1963, she was appointed a member of the Most Excellent Order of the British Empire (MBE), and in 1977, she received an honorary doctorate from Ahmadu Bello University. Her pottery was also on display during Nigeria’s 60th-anniversary celebrations. The Nigerian government bestowed on her the insignia of the Nigerian National Merit Award (NNMA), the country’s highest honour, in 1980. Kwali’s face is on the back of the twenty-naira note, making her the first and only woman to appear on Nigerian currency.

She became an Officer of the Order of the Niger (OON) in 1981. And also received a Silver Award for Excellence at the Smithsonian Institute’s tenth International Exhibition for Ceramic Art in Washington, DC. The Abuja Training Pottery Centre was renamed the Ladi Kwali Pottery Centre, and she has significant roads named after her in Abuja and Niger State.

7 thoughts on “Ladi Dosei Kwali: The First And Only Nigerian Woman To Appear On A Currency Note”