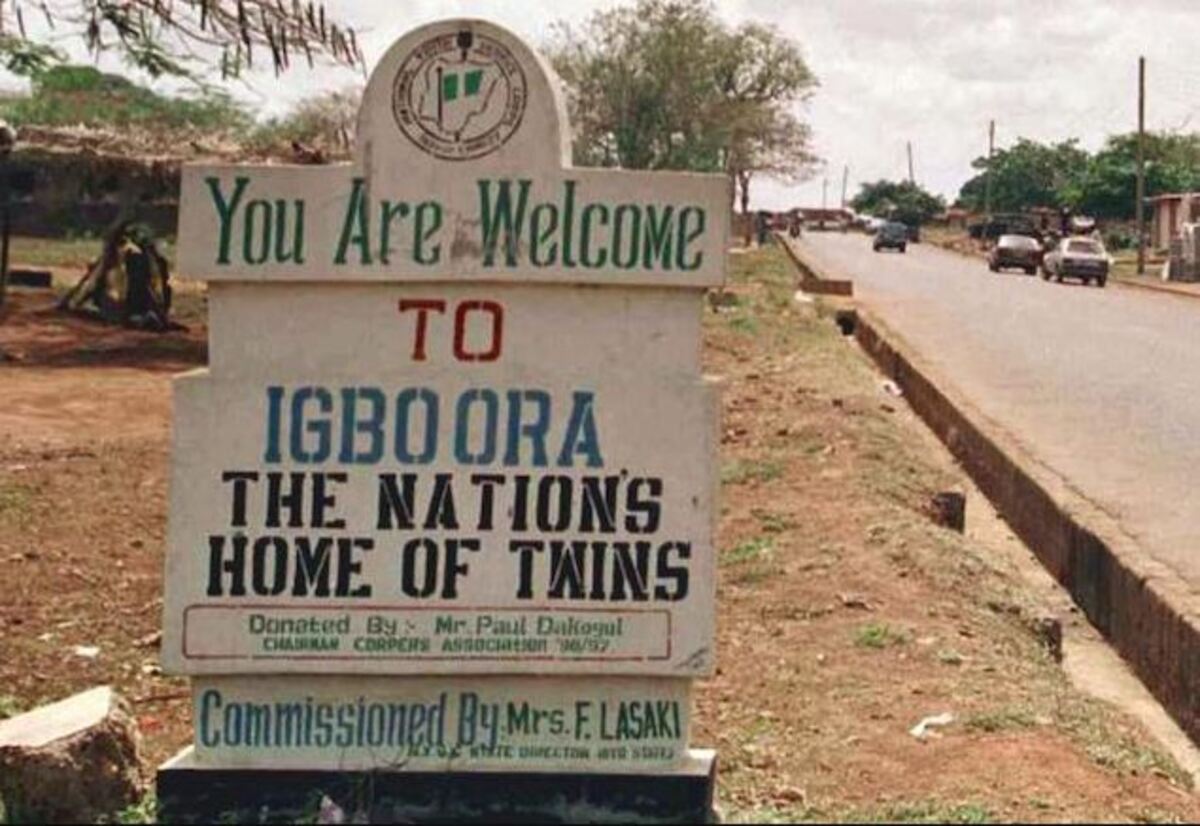 Imagine a town where 60% of the population is made of twins, yes, I said a whooping 60%. This place is the heroic Igbo Ora town located in Oyo State, south west Nigeria.

The town Igbo Ora is said to have the highest number of twin births in the world. A phenomenon also observed in the town of Kodinji in India and Candido Gödel in Brazil.

Igbo Ora is the largest town with multiple twin births in the world. From the main entrance of the ancient town, a boldly written inscription of “THE NATIONS HOME OF TWINS- IGBO ORA,” welcomes first time visitors to the town. A little further into the town has a sculpture of a woman, a mother of twins, with a baby strapped to her back and another on her chest with a girdle, while the twins raise up their hands in an ecstasy of jubilation, Further eulogising their astonishing gift from God.

The name Igbo Ora has an interesting story to it. It was derived from a verbal challenge posed to a friend. The story goes that they were two friends, one lived in the town, while the other lived in the forest. The forest dweller often went to the town to visit his friend and got so used to it, that sometimes, he would feel like not going home. One faithful day, his town-dweller friend asked him to “go to the forest he bought” (the literal meaning of Igbo o ra). Ever since, the saying became a household name with which the town was identified.

One question that will definitely come to your mind on this town with an incredible number of twin birth is, what is the cause of this high number of multiple birth in Igbo Ora? Research has shown that the large number of twin birth in Igbo Ora could be related to the eating habits of women in the region. Though there is no scientific prove to show the direct relationship between dietary intake and twin birth. A research carried out at the University of Lagos Teaching Hospital suggests that a chemical found in Igbo Ora women and the peelings of a widely consumed tuber (yam) could be responsible. Yam contains phytoestrogen, a natural hormone that stimulates the ovaries to produce an egg from each side.

But, for the people of Igbo Ora, there is no puzzle to their twin birth phenomenon. They point to the reportedly high estrogen content in Agida, the local name of yam tubers, and also the influence of Okra leaf or Ilasa Soup, which they assertively believe influences multiple birth among them. Though from Medical Experts perspective, considering the widespread prevalence of twin birth in Igbo Ora town, genetics is the most factual factor.

In African culture, Twins are treated with affection, love and respect, they are seen as blessing and also believed to have divine powers (The ability to harm those who cause them displeasure). In precolonial times, some community used to kill twins and occasionally their mother, as they believe a double birth comes with an evil omen, and the mother must have been with two men to bear two children at once. Gladly, the reverse is the case today, as twins are worshiped and the mothers seen as one so fortunate to bear twins.

Twins are also believed to possess one soul in Yoruba land and many part of sub-saharan Africa. This belief accounts for a whole series of distinctive and in some cases macabre rituals performed, though country specific. For example, In a Yoruba family, if one of the twin dies, the parents order a wooden figure, called “Ibeji” to be carved, to take the place of the dead twin. The half soul of the deceased twin is believed to live on in the Ibeji carving, which is clothes, fed and carried by the mother in the exact manner as the living twin. When the living twin reaches maturity, they take responsibility of the ibeji’s care. This practiced was abolished by a Scottish Missionary, but still practiced by some communities today.

Another African custom to the death of twins is for the mother of the twin to periodically take part in ritual ceremonies where she dances with both Ibeji figures either one in each hand or both tucked into her shirt. These rituals is predominant among Yoruba in Nigeria, Benin, Ghana, Togo and Ivory coast. The rituals are destined to help communities come to terms with the loss of the babies.

Igbo Ora community has so much twin birth that mere mentioning of Taiye or Kehinde in a public place will trigger a simultaneous response from more than four people. Taiye and Kehinde, being the names twins are called in Yoruba land usually have more than one claimant in this land. (Taiye, the one who came first, Kehinde, the one who followed but is believed to be older of the twin). A funny scenario that must be. Hardly will you go to any house in Igbo Ora without seeing at least a set of twins. In fact, you could see three set of twins in a house. The people believe it is God’s gift that cannot be explained.

The town holds a strong belief that twins are special creatures or gods and treat them equally so. They wear the same clothes, shoes, bangles or accessories and even made the same hairstyle. Shrines are also built specially for them, where rituals and sacrifice are made daily, especially when they are sick or dead. Mothers of twin also complain of the hectic process of nursing twin especially during infancy; breastfeeding and making sure they are dressed and treated equally. Most times, the twins cry at the same time, fall sick at the same time or, one after another. To this I believe, mothers of twins deserve double accolades.

Africa has beauty in all ramification, from our food to our language, culture, customs and traditions. This beauty is also replicated in our birth rate. If you desire to have twins or just want to see for yourself this beautiful community, then make your next trip to Igbo Ora in Nigeria, probably a plate of agida and ilasa soup could make you a mother of twin soonest! Proudly an African, any day, any time.