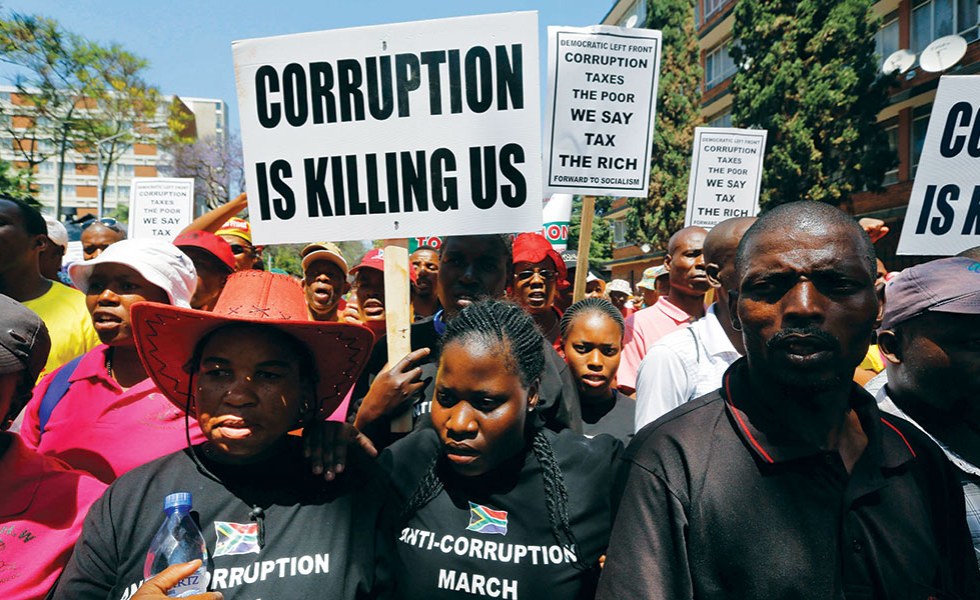 While attending a conference where Prof PLO Lumumba was the Guest speaker, a voice from the audience couldn’t hesitate to express itself. I guess the owner of those words did not even want to be noticed. It said, “Corruption can never end, stop lying”

To our friend whom we only heard but never saw, there’s no problem with being cynical. However, when everyone is being positive, being the only one with a bleak future is a waste of humanity.  On that day, Lumumba, a sworn anti-corruption crusader who wants the best for Africa was telling us a lot about the menace and it’s effect on the continent. He later on tweeted that while in China corrupt leaders are executed, in Europe detained, African corrupt leaders are allowed to run and are elected to office to loot and embezzle the coffers of their countries dry

But is ending the Corruption menace possible?

Most African countries have stepped out to confront this issue once and for all. Although the future of ending corruption is as clear as it is murky, here are the ways African countries can use to bury this menace that is constantly shaking the continent for good.

Investigate, Prosecute and bring to book Officers engaged in corruption.

Recently, a mega scandal featured in Kenya’s local dailies for days. This was the COVID-19 Billionaires scandal. It stemmed from the procurement of items to aid in the country`s war against the deadly Corona Virus. A number of people found way to use Public money for their own selfish needs, while COVID-19  ravaged the country, the best those trusted with the obligation to help manage it robbed the Medical supplies authority dry. To date, investigations that were launched haven’t brought out a clear justification of who stole what and how the person is ending up? To end this menace, taking corruption investigations seriously by those charged with this responsibility will help a long way in bringing perpetrators to book and discouraging like-minded people.

Scandals linked to procurement of assets or services is the nastiest form of corruption. Millions of money are lost in the process. This impairs integrity, virtual and moral principles of procurement. It defiles conventional sourcing standards and in the end public funds end up mismanaged or even more pilfered. Through public procurement, acquisition of all varieties of public property is realized. Public goods and services, construction of works, defense machinery for the military to medical products are procured. What would we be without procurement? But then, when the acquisition of all these doesn’t follow the steps and principles of bidding, so much is lost.

Streamlining the procurement sector will help African countries battle and end this menace. When the right steps are followed, starting from the point of need identification for procurement of a good or service, to evaluation to award of the contract ,corruption will be a thing of the past. Procurement rules and guidelines provide for laws to be followed by procurement officers to ensure they act accordingly. It is a wakeup call to them to follow this rules promptly.

Sensitize the public on the impact of Corruption.

Sensitization and education have worked and demonstrated abundant results wherever they have been used. ” Education is the best competent tool you can use to change humanity,” said Nelson Mandela.

Trust me, there are so many ignorant people in Africa. Whether Corruption affects them or not remains none of their business. However, sensitizing Africans on the ills of corruption will help them join hands in fighting and even shunning corruption. Do you still remember my friend at the Prof. Lumumba talk? Sensitization could help change his attitude towards corruption. Prof. PLO Lumumba through his talk was sensitizing us. He was asking us to step out and become champion for the walk towards a corruption free Africa. So, if anti-corruption bodies across African countries conduct consistent education and sensitization to its` citizens concerning corruption, there will be notable changes.

Every person engages in corruption at least once in a week. You’re probably thinking of bribing an official to land your dream job. Or you have a case in court and bribing the judge will make things lighter. I wouldn’t go without mentioning the Corruption with our armed forces more so the police – the Traffic police.

You and I play a focal role in either increasing or reducing corruption. By bribing or being bribed, colluding, extorting, engaging in Nepotism or Kleptocracy, we propel corruption. You and I should be at the forefront of ending corruption. And how do we achieve that? We shun all corrupt ways and report any attempts of having us engage in this menace.

Are you like the member in the audience with whom we were listening to Prof. PLO Lumumba? Or are you optimistic that African countries can end this menace? Corruption can be brought to book. We can end it; this is not a one-man affair. Everyone walking on this continent should contribute to achieving this common goal. Our sons and daughters must be proud of us someday for ending corruption like we did with small pox.

In the years to come, we must stay hopeful that corruption will be unheard of. With a shift in technology, social media and innovation, all corrupt deals will be quickly traced and perpetrators will be shamed and charged. Africa can end corruption. Let’s all be ambassadors of this good message.