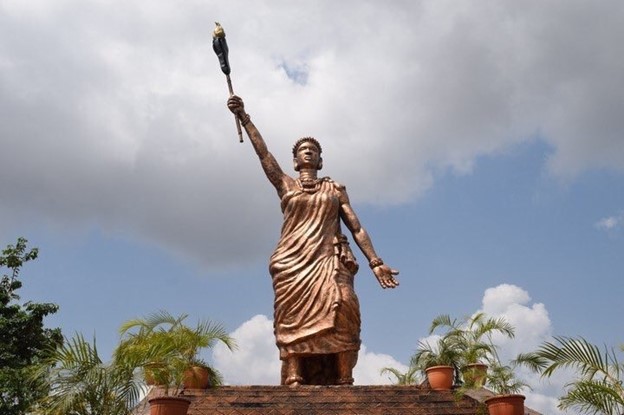 Why are you particularly worried? Pause to consider this: why are you so concerned with what others think of you? Regardless of your sexual identity or background, you are a one-of-a-kind, gifted, and unique person. That is a proven fact. Let this be your starting point and your point of difference. Here is a story about Móremí Àjàsorò to inspire you to be different, not to be bothered about what others think, and to celebrate your special uniqueness.

Dare to be different: The untold story of Móremí Àjàsorò

Ancient Ile-Ife and the Ìgbò people

The people of Ile-Ife were once enslaved by a neighbouring tribe known as the Ìgbò(forest) people in ancient Yoruba land. They raided the people of Ife regularly. The Ìgbò were thought to be as powerful as demi-gods. Móremí Àjàsorò, the wife of Òrànmíyàn, came up with a plan. Many elders and great warriors of the land mocked her and spoke to her in a demotivating manner. Móremí was unfazed, and she went to the Spirit of the River Èsìnmìrìn. She vowed to make a great sacrifice possible if she could discover the Forest people’s strength and save her people.

Móremí wandered to a spot that was frequently raided and allowed herself to be captured. Her beauty drew the attention of the Ìgbò ruler, who made her his queen. She was also very confident and knowledgeable, so it didn’t take long for her to gain the King’s and people’s trust and affection.
This provides her with the access she got to know about their army’s secrets, such as how the Igbo would cover themselves in Ekan grass and bamboo fibers from head to toe in preparation for battle. More so, Ile-Ife’s army will conquer them if someone passes through the Ìgbò warriors with a bunsen burner.

Móremí fled to Ile-Ife after discovering their secrets and revealed them to the Yoruba army. The Yoruba people used Móremí’s classified information to defeat the Ìgbò people in battle finally. Moremi gave up her son, Olúrogbo, to the Esimirin deity to fulfil her end of the bargain. The Yoruba people revered Queen Móremí, and the Edi Festival honors her selflessness.

The Celebration of A Heroic Queen

To date, the Yoruba people continue to mourn her death. They hold her in the highest regard of any woman in the Kingdom. Queen Móremí has been memorialized in various ways, including books about her, and public places named after her. Móremí’s statue was erected in the Ife palace in 2016 by Oba Ogunwusi. The 42-foot statue, also known as the “Queen Móremí Statue of Liberty,” is Nigeria’s tallest and Africa’s fourth-tallest statue.

Therefore, you can make a significant difference in your community and the world at large if you dare to be different. This entails telling yourself the truth about who you are, what you like and dislike, and what you want to do in life. Break off from the shackles of tradition and societal beliefs, and revel in the glory of your true self.

Every person on earth should have a vision. Goals should never be divided into two categories: big and small. Begin with a simple goal, such as learning a new skill. Once you’ve felt the joy and satisfaction of mastering a skill, it’ll become an addictive and inseparable part of your life, and it’ll become ingrained in your personality. This addiction will propel you to new heights and enable you to accomplish many things you could never have imagined.

Never be afraid to have an aspiration, even if the people around you think it’s ridiculous, as they did with Moremi’s. Many of these ideas that were tagged “ridiculous” have changed the world for the better. Don’t be afraid to go it alone if you want to achieve your goals. Always keep in mind that you are your own best friend and that you are never alone. Once you’ve conquered your fear of loneliness, the world is your best asset.

1 thought on “Dare to be different: The untold story of Móremí Àjàsorò”