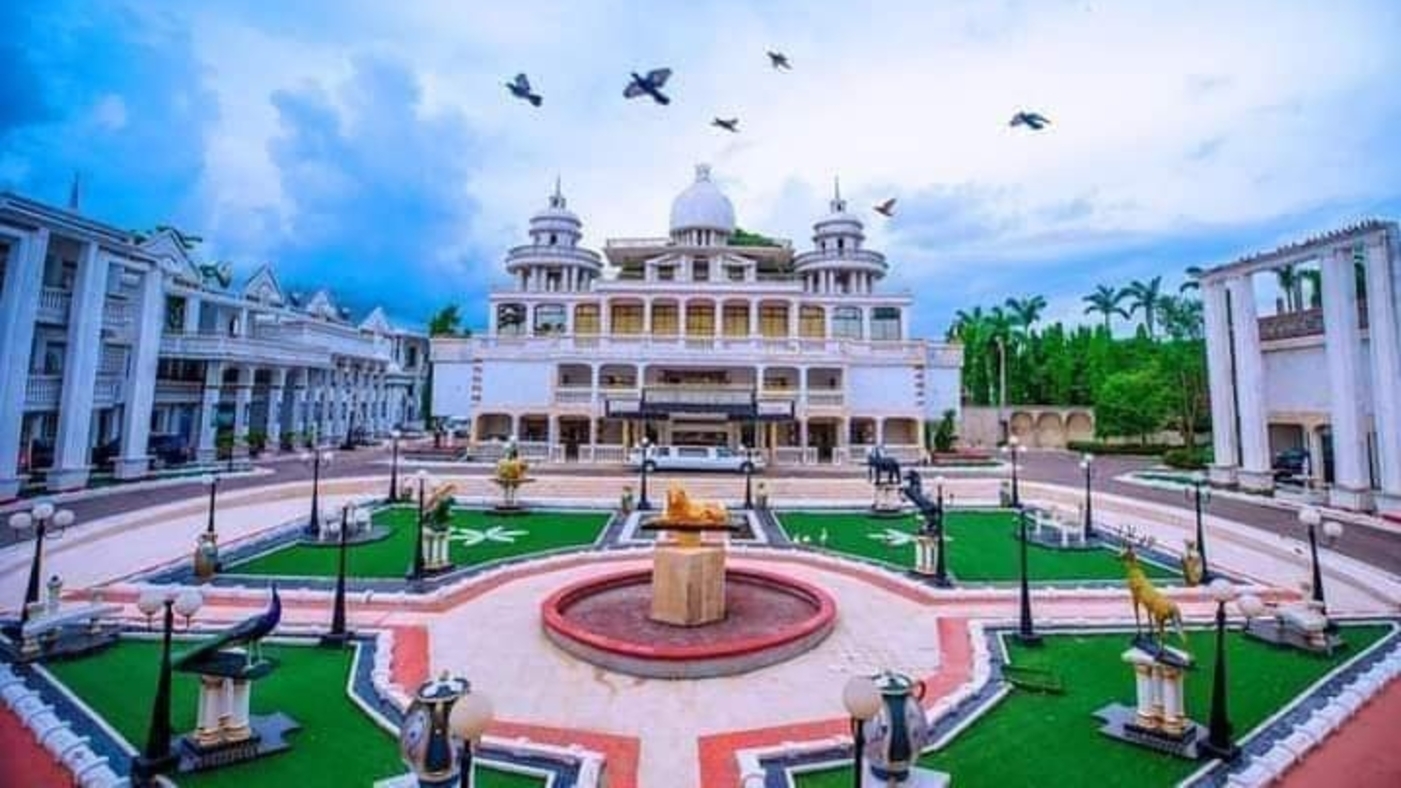 Okene, Kogi State is not as developed or popular as the rest of the State and cities in Nigeria. As a result, having one of the most beautiful Palace in West Africa located in a developing town like Okene is incredible.

Azad is the name of the beautiful palace, which was named after the king’s son, Prince Azad. Azad Palace in Kogi State is one of the most beautiful palaces in West Africa, located near Inioziomi in Okene, Nigeria. HRM Oba Dr. Abdul Rahman Ado Ibrahim, the current ruling king of Ebiraland, began the construction of the palace on the 2nd of June, 1979. He rules Ebiraland from his terrific, magnificent, and world-class Palace, Azad Palace, Kogi State. Although this gorgeous palace is still undergoing construction according to its Master plan. The rooms in the palace are well ventilated and super comfortable due to water fountains rather than electrical air conditioning.

The Okene People and Their Way of Life

Okene is a town in Kogi state, Nigeria’s south-central region, not far from the Niger-Benue river confluence. Ebira is Okene’s primary language. They are commonly referred to as the Ebira people, which means “good people.”

The Igbira people grow cotton in the surrounding area, as well as yams, cassava, corn, sorghum, lentils, peanuts, palm oil and fruits, and cotton. Furthermore, cotton weaving is an ancient craft, and Okene women are well-known for their imported silk weaving. Iron ore from local deposits is shipped to the Ajaokuta iron and steel complex. Individual households fish because of the abundance of the streams and rivers around Okene. Private and public companies have recently developed larger fish farms in the area.

The Okene people value their cultural activities and annually hold several cultural festivals. The most well-known are ‘Echane,’ ‘Eche Ori,’ and ‘Ekuechi.’ Prior to the arrival of Islam, the Okene people practiced a form of African traditional religion centered on a god known as Ohomorihi (the rain-maker), who dwells in the sky. Rites are also performed to appease the god, known for punishing wrongdoers and rewarding genuine intentions. Subject to Ohomorihi is Ori (deities) and spirits, which are religious figures. There is a notion that the dead ancestors live on in a spirit realm in Okene tradition.

His Royal Highness Dr. Abdul Rahman Ado Ibrahim, the Ohinoyi of Ebiraland (King of Ebiraland), was born on the 7th of February 1929. HRM, Dr. Ado Ibrahim was raised in a family of over 150 members, and his dad, the former “Attah of Ebiraland,” was a remarkable hero. According to research, the king’s father spoke 14 languages fluently. He was able to marry wives from all over the country because of his language skills. He spoke Ebira, English, French, Hausa, Igbo, Yoruba, Igala, Nupe, and other languages. He was known to have written a book while still alive.

HRM Dr. Ado Ibrahim attended a Quranic School for his nursery education. In 1940, he concluded his primary education at the NA School in Okene, Kogi State. He continued his secondary education at Ondo Boys High School and Oduduwa College and graduated in 1949.

Dr. Ado Ibrahim earned a B.Sc. in Economics from the London School of Economics in the 1950s and an MBA from Harvard Business School in 1959. He became king in 1979, at the age of 50, the same year he began construction on the Azad Palace, Kogi State. HRM Dr. Ado Ibrahim is currently over 90 years old and in good health.

When is the Azad Palace in Kogi State open and closed?

The palace does not have an official opening and closing time. It is always open to the public.

Who is permitted to visit the Azad Palace in Kogi State?

What makes the Okene people famous?

Cotton weaving. Cotton weaving is a popular craft, and Okene women are well-known for their imported silk weaving. Iron ore from local deposits is shipped to the Ajaokuta iron and steel complex.

What exactly does Okene mean?

Aside from the Okene, what other well-known tribes can be found in Kogi State?

The Igala tribe. Igala is the state’s majority ethnic group. The people of Northern Nigeria’s Kabba Province make up the state as it currently exists. Faruk Imam was one of the first Qadis in Kogi State.

Are Ebira people present in Kogi?

Ebira could be found today in Okene, Adavi, and Ajaokuta. They can also be found in Okehi Local Government Areas of present-day Kogi State in Nigeria’s North-Central geopolitical zone. At the same time, the Owo (of Ago Panu) are a subgroup of the Yoruba people of Nigeria’s South-western region.

What is Kogi’s native language?

Kogi has three predominant ethnic groups and languages: Ebira, Igala, and Okun (similar to Yoruba), as well as other minorities such as Bassa, a small fraction of Nupe primarily in Lokoja, Kakanda, Oworo people, Gwari, Ogori Magongo, and the Eggan society under Lokoja Local Government.

What is the relationship between Igala and Ebira in Kogi State?

According to research, before the British colonial government in Nigeria, history recorded that Atta Igala, the then Jukun king, and the Hausa king usually met in Kaduna. It is worth noting that history now traces Ebira’s migration from Igala. And that Ebira is Igala’s junior son.

1 thought on “Azad Palace, Kogi State: One of the Most Beautiful Palaces in West Africa”