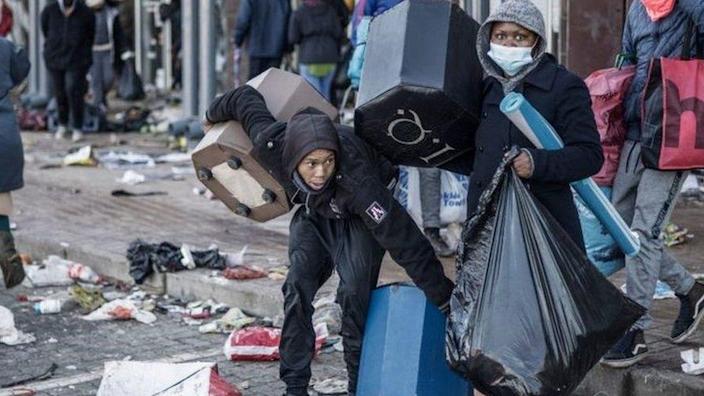 Mlungisi runs with his looted goods from the Supermarket in downtown Johannesburg.
He has stolen two cartons containing cookies and sweets.
He is racing back home to deposit them at his shanty and return to loot more.
The big malls in the city have been broken into by rioters and the goods in them are being carted away.
The looting in South Africa is happening across various cities and towns in the country.

Mlungisi is overjoyed, the thrill of looting is invigorating and he is having the time of his life.
All the luxury items he has been dreaming about all his life are now within his reach if only he can get into the shops and malls besieged by unrelenting looters.
There is unrest in the land and the police cannot stop the looters. They have been overwhelmed by the sheer number of the mob.

He is not a fan of the former president but he joined the protest because he knew it will turn into an avenue for looting.
Mlungisi is jobless and is a thug, open to participation in any form of criminal activity.
He has been poor all his life and has lived in different slums.
He has always envied the people with jobs, the wealthy people who drive fancy fans, live in cosy houses, shop at the big malls, wear nice clothes, relax at top lounges and Jozi clubs.
He can’t afford any of those basic luxuries because of his poverty and poor education. He can barely speak, read or write English.

Mlungisi smiles as he walks into his shanty room and surveys the looted items stacked on the bed.
He has looted items worth hundreds of thousands of rands and will loot some more.
“Ubuyile ekhaya?” Jabulile, his girlfriend asks in Zulu.
”Yebo kodwa ngiyaphuma futhi” He replies and informs her he is going out again.
Jabulile threw one of the sweets into her mouth and said, “Imnandi, delicious!” and continued, “Kuthiwani ngamaphoyisa police?”

Mlungisi shook his head, “amaphoyisa awekho”, telling her to be calm that the police are not around.
“Ngizobuya, I will be back!” He stated as he walked out of the room, heading to the streets to loot more items.
“But, is this the South Africa that Nelson Mandela fought for?” A voice in his head asked as he started running towards a Shoprite mall.
“Is this the South Africa that Madiba sacrificed 27 years of his life in prison in the struggle against apartheid for?”