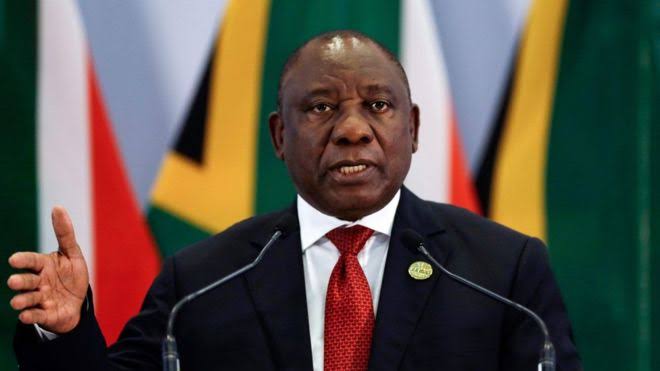 Cyril Ramaphosa is the leader of Africa National Congress (ANC) and the current President of South Africa.

Born in Soweto on 17 November 1952, Cyril Ramaphosa is the son of a retired police officer, Samuel Ramophosa, he is happily married to Tshepo Motseope and has 5 Children.

He assumed office on 15 February 2018, following the resignation of Jacob Zuma as the Country President on 14 February 2018.

He was very active in student Politics as a young man and was detained twice for organizing pro-Frelimo rallies.

He was one of the Chief negotiators during South Africa transition to democracy and played a huge role to bring about a peaceful end to apartheid which resulted in the conduct of South Africa’s first fully democratic election in April 1994.

He is the chair of the board of MTN, member of the board for Lonmin PLC which is a British producer of platinum group metals operating in Bushveld complex of South Africa.

He is a member of the Coca-Cola company International advisory board, a member of Unilever Africa advisory council and the first deputy chairman of commonwealth Business Council.

He was included in Times 100 men and Women shaping and transforming the World in 2007 and was voted in 2004 as the 34th in the list of the top 100 greatest South Africans of all time.

As a businessman and a trade union leader, Cyril Ramaphosa served as the Deputy President of South Africa from 2014 – 2018 and the results of today’s National and Provincial legislative election will decide if he will continue as the Country President.

The ANC currently has 249 seats out of the 400 seats in the National Assembly of South Africa and he will need just that or more to retain his presidency.