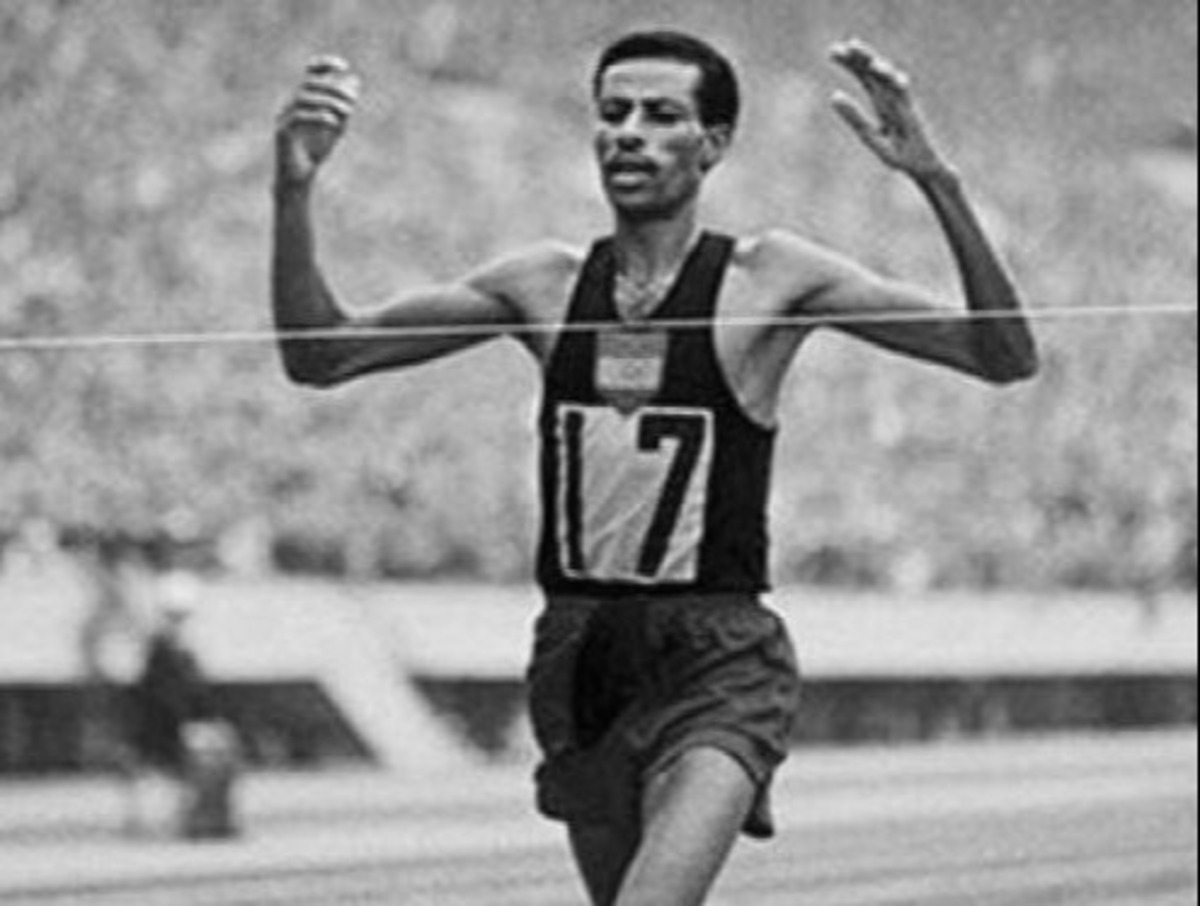 From being a shepherd’s son to running an Olympic race barefoot, Abebe Bikila becomes not just the first African to win an Olympic medal, he was also the world’s fastest marathon runner at the time. For Bikila, being the African to win a gold medal in an Olympic race wasn’t enough, he was also the first person to win a gold medal in two consecutive Olympic marathon races. Meeting with tragedy at the peak of his career, the story of the shepherd boy is nothing but an inspiration to many young Africans out there.

From Humble Background To Olympic Gold

Abebe Bikila’s background was particularly humble, being born in Jato, a village in the Debre Berhan district of Shewa in Ethiopia, a country in the east of Africa. He was born on the 7th of August 1932, the second son of Wudinesh Beneberu with her second husband, Bikila Demissie. Young Abebe grew up in a village setting and received some church education. Across their community, the first African Olympic gold medalist was famed for his outstanding swimming skill, guna playing, and horse riding.

The journey of Bikila to the Olympic titles is not a comfortable one, having to join the army to support his family at the age of 17, his zealousness and determination were what enabled him to horn his talent. His success could also be ascribed to good mentorship, all thanks to Onni Niskanen who discovered his athletic talent at the military training camp and guided him to the Olympic titles.

Abebe Bikila: The First African to Win an Olympic Medal

The shepherd boy won gold in his first-ever Olympic appearance, setting a world fastest record despite having run 16.2 miles without shoes. Although running barefoot has been a part of him from the military training camp, the scenario was particularly different as they were running the last few miles on the cobblestones of the Appian Way.

Bikila did get a new pair of running shoes for the Rome Olympics but the shoes were smaller for him and gave him blisters. So, he decided to abandon the shoes and run the entire race barefoot, setting a world record of 2 hours, 15 minutes, 16.2 seconds, and becoming the first African to win an Olympic medal. This record he later broke four years later to win his second Olympic gold title.

Despite having his career cut short by a tragic car accident that left him paralyzed from the waist downward, the two-time Olympic gold medalist remained optimistic, accepting his condition in good faith. Most of all, he demonstrated contentment! In one of his interviews on Fast Tracks: The History of Distance Running in 1983, he said “Men of success meet with tragedy. It was the will of God that I won the Olympics, and it was the will of God that I met with my accident. I accepted those victories as I accept this tragedy. I have to accept both circumstances as facts of life and live happily.”

Aside from contentment and perseverance, Bikila also teaches us that no one goes far in life without the help of others. Although he had the talent, he was able to enter the Rome Olympic on Niskanen’s recommendation. This tells us that talent can only take you as far as you know, experience will take you the longest mile, and this experience doesn’t necessarily have to be ours.