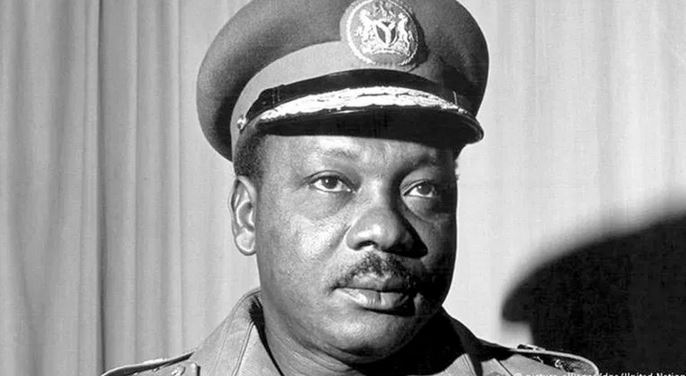 He was assassinated on July 29, 1966 by a group of soldier led by General Murtala Mohammed, Theophilus Danjuma and Ibrahim Badamasi Babangida.

1. As a corrective regime we must ensure that the fatal maladies of the past are cured before we relinquish power.

2. The National Military Government owes it as a duty to the people of this country to remove the ills which infested the former regime, to restore the faith of our people in their fatherland and its institutions, so that when the
time comes for the civilian government to return, a healthy body politic would have emerged, and last vestiges of bitter factionalism removed.

“Our determination is that until the two decrees I have signed today are abrogated, every individual should be preoccupied with the task of national reconstruction, not as ex-politician, but simply as a Nigerian with
faith in his country’s destiny.”

4. It is common knowledge that civil servants are expected to tender advice to Ministers but it was not obligatory on the part of Ministers to accept advise so tendered. It will therefore be wrong to blame civil servants for mistakes made by their Ministers who in many cases did not accept the advice given to them by these officers.

5. Nigerians must understand and respect one another in the new national spirit. Those ex-politicians in different camps who previously regarded one another as enemies should now forget the past and work together for the common good

“Nigeria ceases to be what has been described as a federation. It now becomes simply the Republic of Nigeria”

6. I wish to appeal to all newspaper editors and columnists to look for a more profitable pastime and desist from criticising civil servants unnecessarily especially as they realize that because of the tradition of their calling, civil servants are barred from defending themselves on the pages of newspaper

“We cannot afford to continue with sterile political strife and mutual recriminations. I have therefore ordered that there shall be no display in party flags or symbols, and no shouting of political slogans.”