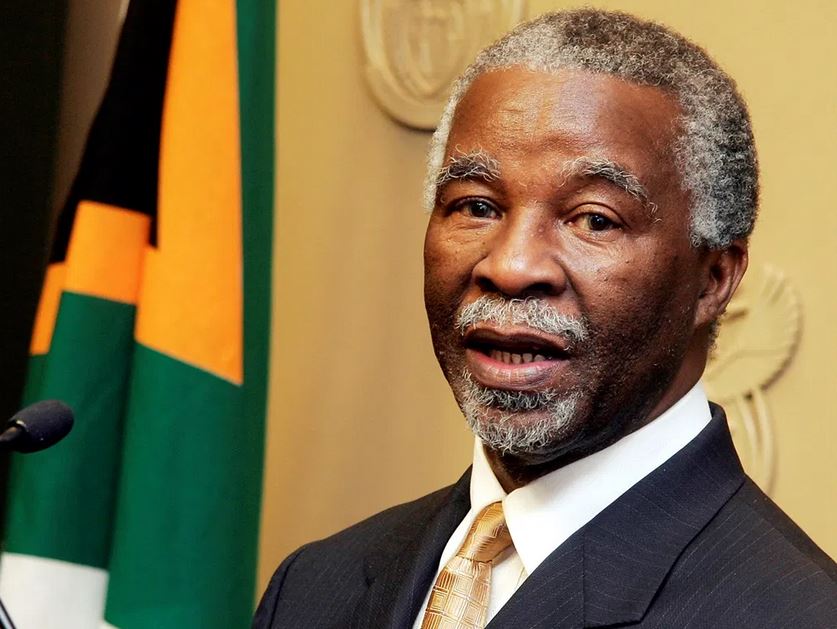 Thabo Mbeki is an Economist, a politicians and the second President of South Africa, who served from June 1999 to September 2008.

His father , Mbeki senior was a longtime leader in the Eastern Cape African National Congress (ANC); an organization which was fighting for the elimination of apartheid in South Africa

1. Our experience over the last 20 years has shown that indeed people must themselves become their own liberators. You cannot wait for somebody else to come and rescue you

2. The work we have done in pursuit of the vision and principles of our liberation movement has at all times been based on the age-old values of Ubuntu, of selflessness, sacrifice and service in a manner that ensures that the interests of the people take precedence over our desires as individuals.

3.  We are not being arrogant or complacent when we say that our country, as a united nation, has never in its entire history, enjoyed such a confluence of encouraging possibilities.

4. The people of Zimbabwe have a responsibility to ensure that the government that they elected behaves properly.

5. When will the day come that our dignity will be fully restored, when the purpose of our lives will no longer be merely to survive until the sun rises tomorrow!

6. I am an African. I owe my being to the hills and the valleys, the mountains and the glades, the rivers, the deserts, the trees, the flowers, the seas and the ever-changing seasons that define the face of our native land.

7. I think that probably the most important thing about our education was that it taught us to question even those things we thought we knew.

8. As Africans, we need to share common recognition that all of us stand to lose if we fail to transform our continent.

9. I think you’re a much happier person if you say ‘Even if I get involved in politics, I’m only doing so in order to serve the people’. You will sleep much easier, not serving yourself, but having done your best to serve the people. Even if you have not succeeded, at least you’ve tried. You haven’t stolen anything, and you haven’t robbed the people.

10. Those who oppressed us described us as the Dark Continent

11. The problem is not a lack of understanding of what we are saying and doing; the problem is difference of opinion about what to do

12. You cannot just depend on the market, because the market will say: China needs oil; China needs coal; China needs whatever, and Africa has got all these things in abundance. And we go there and get them, and the more we develop the Chinese economy, the larger the manufacturing is, the more we need global markets – sell it to the Africans which indeed might very well destroy whatever infant industries are trying to develop on the continent. That is what the market would do.

13.In practical and measurable ways, we have to keep pace with the rising sun, progressing from despair to hope, away from a brutal past that forever seeks to drag us backwards towards a new tomorrow that speaks of change in a forward direction

14. As we mourn President Mandela’s passing we must ask ourselves the fundamental question – what shall we do to respond to the tasks of building a democratic, non-racial, non-sexist and prosperous South Africa, a people-centered society free of hunger, poverty, disease and inequality, as well as Africa’s renaissance, to whose attainment President Nelson Mandela dedicated his whole life?

15. We can’t treat the matter of black economic empowerment as just the redistribution of existing wealth. It really has to focus on new investment, on growth, on development of employment and so on and so on.

16. Our minds will continue the restless inquiry to find out how it is possible to have a surfeit of productive wealth in one part of our common globe and intolerable poverty levels elsewhere on that common globe.

17. The full meaning of liberation will not be realized until our people are freed both from oppression and from the dehumanizing legacy of deprivation we inherited from our past.

18. As the sun continues to rise to banish the darkness of the long years of colonialism and apartheid, what the new light over our land must show is a nation diligently at work to create a better life for itself.

19. If you don’t understand history, you will not be able to deal with today’s issues

20. At the dawn of a new life, our practical actions must ensure that none can challenge us when we say – we are a nation at work to build a better life.